Earlier this year, government bond spreads in several European countries ballooned dangerously in response to the Greek debt crisis. In May the EU came to the rescue, Greece agreed to a combined loan/austerity package, and spreads settled down. The crisis was over.

But for how long? As the chart on the right shows, spreads have been steadily rising since May in Greece, Ireland, and Portugal, and now stand as high or higher than they were at the height of the crisis. And 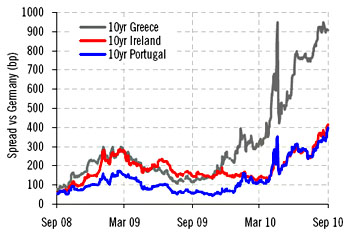 Spain may be next. Edward Hugh explains in a long post that ends with an analogy:

According to one popular analogy currently circulating , the EuroArea countries could be likened to a group of 16 Alpine climbers scaling the Matterhorn who find themselves tightly roped together in appalling weather conditions. One of the climbers — Greece — has lost his footing and slipped over the edge of a dangerous precipice. As things stand, the other 15 can easily take the strain of holding him dangling there, however uncomfortable it may be for them, but they cannot quite manage to pull their colleague back up again. So, as the day advances, others, wearied by all the effort required, start themselves to slide. First it is Ireland who moves closest to the edge, getting nearer and nearer to the abysss with each passing moment. And just behind Ireland comes Portugal, while some way further back Spain lies Spain, busily consoling itself that it is in no way as badly off as the others who have already lost there footing. But if Spain cannot hold out, and all four finally go over, each dragged down by the weight of those who preceded them, then this will leave some 12 countries supporting four, something that the May bailout package only anticipated as a worst-case scenario.

This is especially bad news since widening spreads can easily become self-fulfilling prophecies. Greece, Ireland, and Portugal were in big enough trouble already, but high interest rates on their debt could turn a difficult situation into an impossible one, requiring yet another massive bailout that might have catastrophic knock-on effects. And remember: we’re all one big happy global economy these days. If Europe catches a cold, we’re going to catch it too.

And that’s not all. Closer to home, housing bubble Cassandra Meredith Whitney is back with a report on municipal debt. She believes that cities and states — but mostly cities — are on the verge of a massive wave of defaults that are going to reprise the systemic bank defaults of 2008. “The similarities between the states and the banks,” she told Maria Bartiromo on Tuesday, “are extreme to the extent that the states have been spending dramatically, growing leverage dramatically. Muni debt has doubled since 2000.” Felix Salmon adds:

The more lasting effect of widespread defaults will be in the real economy, where public employees and public services will start feeling the pinch of forced austerity. Once you approach default, no one will roll over your debt any more and no one will insure your bonds. So you have to slash your budget: you have no choice. That process has barely begun, in the U.S., and depending on the timing, it could contribute markedly to a bout of deflation or even a double-dip recession. If the first recession had its causes in the nexus of finance and real estate, its follow-up could well be based in local government.

As a resident of California — #1 on Whitney’s list of disaster areas — I find this all terrifyingly plausible. Buckle your seatbelts.