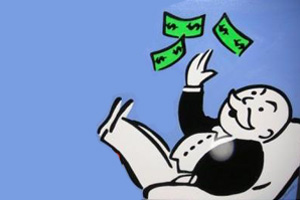 A couple of weeks ago I sort of vaguely intended to write a bit about the extreme sensitivity of the American business community. I had just read someone (I forget who) saying that he had been out in the world chatting with business folks and had fully expected their anger with Barack Obama to rate about an 8 out of 10. But no! It was 10 out of 10. They were in an absolute frenzy of combined rage (over what he was doing to them) and fear (over what he might say about them if they dared to criticize him publicly).

Needless to say, this seemed crazy to me. On a substantive front, after he took office Obama continued George Bush’s rescue of the banking system, boosted the economy by passing a stimulus bill, and saved untold thousands of businesses by rescuing GM and Chrysler. His healthcare reform bill was so business friendly it’s a wonder the industry didn’t keel over in hypoglycemic shock after it was passed. On the rhetorical front, he’s taken a few modest shots at the financial industry, but not much more. So what were they all so apoplectic about?

But then I stopped and decided there was no point. If I asked, business folks would say they were afraid to invest because of Obama’s blizzard of new regulations. They’d say they were afraid he was going to raise their taxes. They’d say he had somehow screwed up the banking sector so that they could no longer get loans the way they used to. They’d say they were afraid of cap-and-trade and card check, which Obama supported even though they both went nowhere. Looking at the big picture, they’d claim the administration is squeezing them on all sides because its actions have resulted in slow hiring, higher taxes, impaired lending, and further limits to individuals’ ability to deploy capital in business ventures (whether their own or other people’s).

Or, as John Gapper put it earlier this week, quoting the U.S. Chamber of Commerce, Obama has “vilified industries while embarking on an ill-advised course of government expansion, major tax increases, massive deficits and job-destroying regulations.” Gapper himself says there’s some truth to this: “Mr Obama has failed to understand or communicate the role big business plays in remoulding the economy and creating highly skilled and highly-paid jobs. Unlike Bill Clinton, the previous Democratic president, he sounds as if he thinks multinationals do little but suck work out of the US.”

And Gapper’s evidence? As Ezra Klein and Matt Yglesias point out, precisely one thing: Obama’s criticism of large companies for using tax breaks to ship jobs overseas. That’s it. Something that’s virtually a staple of American politics. Obama is following in the footsteps of thousands when he complains about this, including plenty of Republicans when they’re in a tight election campaign.

What’s remarkable about all this is that Obama is, patently, not anti-business. All of the corporate complaints above, when you dig an inch below the surface, amount to lashing out at phantasms. However, although Obama isn’t anti-business, it is fair to say that he’s not especially business friendly. And after decades of almost literally getting their every heart’s desire from Republican presidents and congresses, this has come as something as a shock to the corporate community. When Obama puts a tax break in the stimulus bill, it’s aimed mainly at the middle class, not the rich. When he hires a labor secretary, it’s someone who actually thinks labor laws should be enforced. When he says he wants to pass a healthcare reform bill, he actually does it. (Its impact on big business is close to zero, but no matter.) There’s no evidence at all that Obama wants to punish big business, but at the same time it’s quite plain that he cares much more about the middle class than he does about the rich.

And that’s pretty hard for them to take. So they’re apoplectic. On a scale of 1 to 10, he’s a ten. Merely refusing to coddle the business community endlessly is all it takes these days.