Derek Thompson is disappointed with liberal reaction to the deficit commission report. For example, liberals like me:

The third most frustrating criticism comes from folks like Kevin Drum, who claims that any effort to reduce the deficit that isn’t 98% health care reform isn’t serious. The fact is, there are no feasible ways to definitively curb health care inflation starting today (if Kevin has some in mind we need to hear them!). We can shoot a thousand arrows at the medical inflation monster — health care reform, to its great credit, does. We can nudge providers and customers away from pay-for-service, which rewards over-treatment. We can increase cost-sharing to help patients react to prices, increase 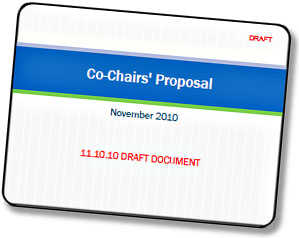 transparency and quality through exchanges, and so on. But these are efforts, not answers. If we waited for the messianic Answer to health care inflation, we might never act on the budget. I can’t imagine that’s what Kevin would prefer. Instead, we should make the changes we can make today, slowly.

This is fair up to a point. But only up to a point. Here’s the problem: most plans to reduce the long-term deficit consist of three things: shiny baubles, smoke and mirrors, and actual deficit reduction measures. You want to minimize the former and emphasize the latter, and on that score I don’t think Simpson-Bowles does very well.

Their discretionary cuts are a combination of baubles and smoke and mirrors. The baubles are the trivia, like cutting printing costs and eliminating earmarks. The smoke and mirrors comes from vague non-choices like cutting the federal workforce 10% or pretending that a spending cap will actually accomplish anything. Discretionary spending isn’t really a long-term problem in the first place, but if you’re going to address it anyway, then address it by proposing actual program cuts. You think manned space exploration is a boondoggle and you want to cut NASA’s budget in half? Fine. You think ethanol subsidies are outrageous and you want to eliminate them? Great. You think our nation would be safe with nine supercarrier groups instead of a dozen? Preach it. But that’s what it takes to cut the discretionary budget: cuts to real programs, not handwaving about caps and generic rollbacks.

Next up are their tax reform proposals, which are almost entirely smoke and mirrors. You can make any deficit reduction plan easier by proposing a tax system that (you claim) will boost growth rates by 1% per year. Run that out over 50 years and economic growth will take care of half your problem. Hooray! But the evidence that this will actually happen is close to zero. Our current tax system just isn’t that inefficient. Pretending that a better tax regime will supercharge economic growth isn’t as bad as relying on the infamous troika of waste, fraud, and abuse, but it’s close.

Their Social Security proposal is…..actually not bad. With one change I could probably accept it as is.1 Still, even though I favor taking action on Social Security now, this is basically a bauble. It’s reponsible for only a small part of the long-term deficit, and it’s not something that rises forever. It’s a one-time increase associated with the retirement of the baby boomer generation.

And then you get to healthcare. This is the big one. This is 90% of our long-term deficit problem. I don’t have any real problem with tackling inefficient discretionary programs or sprucing up the tax code or fixing Social Security. But burbling on at length about this stuff mainly serves to allow us to avoid talking about our real problem. Because, as Derek says, it’s too hard. But that’s like an alcoholic nattering on about putting a taxi service on speed dial or remembering to take his vitamins every day. Those are great ideas, but they’re basically distractions that prevent you from facing up to the fact that you need to stop getting hammered every night.

The whole point of a deficit reduction commission is that they can address the hard truths that a bunch of politicians can’t. If Simpson-Bowles were really dedicated to hard truths, their report would have said two things in no uncertain terms. First, we’re not going to waste too much time on discretionary spending or Social Security. They’re shiny baubles that distract us. So here are links to half a dozen good plans for reining in both of them. Go ahead and read them at your leisure.

Second, healthcare costs are going up. We’re getting older, medical technology is advancing, and the spending curve on healthcare heads to infinity if we don’t do something about it. So we’ve decided that essentially our entire report is going to be about healthcare because we want to rub your faces in the fact that you have to deal with it whether you like it or not. This means, at a minimum, two things: (1) distilling the best ideas around for reining in rising healthcare costs, and (2) acknowledging that costs are going to go up anyway and we’re going to have to raise taxes to deal with it.

But as hard truths go, I guess that’s a little too hard. Tax increases! Paying doctors less! Telling the American public that they can’t have every procedure they want just because they want it! Besides, we just spent over a year passing healthcare reform, and we’re all exhausted. PPACA made only modest progress on cost controls, and that was hard enough. Better to just do some handwaving about a cap on growth rates and call it a day.

I get it. No one wants to dive back into that briar patch right now. But that’s too bad. So go ahead: take a whack at reducing discretionary spending by 2% if it makes you feel virtuous. Go ahead and reform the tax code. It needs it. And sure, fix Social Security just as a warmup to prove that you can hit AA pitching before you move on to the show.

But don’t pretend that you’ve really done much of anything about the long-term deficit. For that, we’re going to need a whole bunch of straight talk about tax hikes nobody likes and cost controls that everybody hates. But isn’t straight talk like that exactly what Simpson and Bowles were supposed to give us?

1I would ditch the increase to the retirement age and pay for it by gradually increasing payroll tax contributions from 12.4% to 13%. The rest of their proposal strikes me as fairly reasonable.