Over at The Corner, J.D. Foster examines the Fed’s rationale for its quantitative easing program and finds it so inexplicable that he concludes it’s nothing more than a pretext for their real reason — a reason so incendiary that Ben Bernanke dare not speak its name. Ladies and gentlemen, here it is: 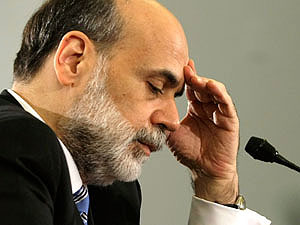 expire — e.g., the lower tax rates on small businesses and the lower rates on capital gains and dividends. Slamming a sputtering economy with a major tax hike threatens to induce another recession, and with inflation already near zero, the possibility of deflation becomes very real. But Bernanke can’t or won’t say so.

Foster’s incredulity is based on an op-ed in which Bernanke explains why the Fed embarked on its QE program. In it, Bernanke says he’s worried about deflation, but also says that growth next year will probably be about average. But deflation can’t possibly be a worry if the economy is growing normally, so he must be hiding the real reason for QE2.

Perhaps. But let’s take a look at what Bernanke actually said in the op-ed Foster links to:

Unfortunately, the job market remains quite weak; the national unemployment rate is nearly 10 percent, a large number of people can find only part-time work, and a substantial fraction of the unemployed have been out of work six months or longer. The heavy costs of unemployment include intense strains on family finances, more foreclosures and the loss of job skills.

Today, most measures of underlying inflation are running somewhat below 2 percent, or a bit lower than the rate most Fed policymakers see as being most consistent with healthy economic growth in the long run. Although low inflation is generally good, inflation that is too low can pose risks to the economy — especially when the economy is struggling. In the most extreme case, very low inflation can morph into deflation (falling prices and wages), which can contribute to long periods of economic stagnation.

Even absent such risks, low and falling inflation indicate that the economy has considerable spare capacity, implying that there is scope for monetary policy to support further gains in employment without risking economic overheating. The FOMC decided this week that, with unemployment high and inflation very low, further support to the economy is needed.

Italics mine. Bernanke could hardly be clearer: deflation is a distant and small risk. He’s not immediately worried about that. What he is worried about is massive and persistent unemployment, and he thinks that with inflation well controlled he can use QE2 to stimulate the economy and reduce unemployment without risk.

He might be wrong about that. Who knows? But his explanation is simple and direct and makes perfect sense. There’s no need to dig feverishly for some buried Da Vinci code in order to prove that it’s really all about taxes. I know conservatives are reluctant to hear this, but marching orders or not, not everything has to be about taxes.