Did Barack Obama screw up by not focusing on the economy like a laser right from the beginning of his administration? I think there’s a good argument to be made that a bigger, better stimulus would have goosed the economy more strongly, reduced unemployment, and helped eventual Democratic election prospects. But once that was finished up, what else could he have done? Here is the core of Bruce Bartlett’s case:

Substantively, I think there was more that could have been done to stimulate growth that might have been doable if Obama had been more engaged in the problem. For example, all economists know that monetary policy is critical to restoring growth. Yet Obama allowed vacancies on the Federal Reserve Board to be unfilled for months and then did nothing to get his appointees confirmed in the Senate.

….If Obama had been out there every day talking about the economy, pressuring Congress and cabinet agencies to be more active, and paying closer attention to the progress of the stimulus, then I think the political dynamics might have been quite different. It’s likely that further 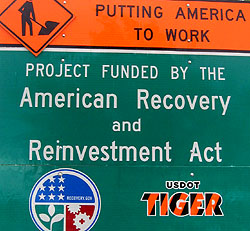 stimulus, which has appeared to be politically impossible, might have been achievable. At least Obama could have been more engaged in the extension of expiring tax cuts, which threaten a significant fiscal contraction on January 1 unless Congress acts quickly.

Maybe. But this still strikes me as thin gruel. A better Fed still would have been a Fed with a limited ability to affect the economy. What was needed was fiscal stimulus, and I have my doubts that talking relentlessly about the economy would have improved the prospects of getting Congress to act. Republicans and centrist Dems simply weren’t persuadable and, in any case, probably didn’t care all that much about unemployment in the first place. Which brings us to this:

It has amazed me since the beginning of the recession that the many millions of those unemployed seem to have accepted their fate so meekly. I don’t know why this is the case. Perhaps it’s because they have been browbeaten into accepting the right-wing idea that they are just lazy and could find a job if they really wanted to, or maybe they have given up hope of ever finding a job and taken early retirement, or perhaps a still-working spouse has kept the family adequately afloat.

I think that a major factor is the decline of labor unions in the U.S., especially those in the private sector, because they tend to be the organizers of political pressure related to jobs. Another factor may be that so many of those that are still union members are now in the public sector, where they have different political priorities, such as protecting their own jobs, pay and benefits from cuts forced by sharply-declining state and local government revenues.

As a structural explanation, this strikes me as much more powerful. Mountains of research suggests that members of Congress don’t really care about the desires of the poor and the working class very much, and this goes double when the poor and working class aren’t taking to the streets with torches and pitchforks. And it goes triple when there’s no longer any institutional power to speak for them, something that the long-term decline of private sector unionization cemented into place many years ago.

So count me as still skeptical. By focusing on other things, Obama passed a historic healthcare bill, a decent financial reform bill, and half a dozen smaller bills. If he had skipped this stuff and instead spent all his time “focused on” the economy, I think the result would have been no healthcare reform, no financial reform, and — maybe — a loss of 55 seats in the House instead of 65. There just flatly wasn’t that much he could do. Warts and all, I think he made the right decision.