Dana Priest and William Arkin have a big piece in the Washington Post today about the vast expansion of local counterterrorism efforts in the United States since 9/11. An excerpt:

At the same time that the FBI is expanding its West Virginia database, it is building a vast repository controlled by people who work in a top-secret vault on the fourth floor of the J. Edgar Hoover FBI Building in Washington. This one stores the profiles of tens of thousands of Americans and legal residents who are not 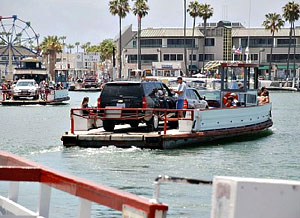 accused of any crime. What they have done is appear to be acting suspiciously to a town sheriff, a traffic cop or even a neighbor.

….[For example, there’s the question of whether a] man snapping a picture of a ferry in the Newport Beach harbor in Southern California simply liked the way it looked or was plotting to blow it up.

Suspicious Activity Report N03821 says a local law enforcement officer observed “a suspicious subject . . . taking photographs of the Orange County Sheriff Department Fire Boat and the Balboa Ferry with a cellular phone camera.” The confidential report, marked “For Official Use Only,” noted that the subject next made a phone call, walked to his car and returned five minutes later to take more pictures. He was then met by another person, both of whom stood and “observed the boat traffic in the harbor.” Next another adult with two small children joined them, and then they all boarded the ferry and crossed the channel.

All of this information was forwarded to the Los Angeles fusion center…[where] it would immediately be entered into the Guardian database, at which point one of three things could happen:

The FBI could collect more information, find no connection to terrorism and mark the file closed, though leaving it in the database.

It could find a possible connection and turn it into a full-fledged case.

Or, as most often happens, it could make no specific determination, which would mean that Suspicious Activity Report N03821 would sit in limbo for as long as five years, during which time many other pieces of information about the man photographing a boat on a Sunday morning could be added to his file: employment, financial and residential histories; multiple phone numbers; audio files; video from the dashboard-mounted camera in the police cruiser at the harbor where he took pictures; and anything else in government or commercial databases “that adds value,” as the FBI agent in charge of the database described it.

Definitely read the whole thing. But here’s one thing to keep in mind as you read: in the great debate over body scanners at airports recently, one of the most popular lines of criticism was that counterterrorism efforts should rely more on intelligence and police work and less on physical security. And maybe so. But at ground level, this is what intelligence and police work looks like: having your name stored in a central FBI database for years because you took a picture of the world’s smallest ferry boat.

This isn’t necessarily wrong. Maybe it’s the price of living in the modern world. But it is what it is, and it’s what we get if we insist in ramping up intelligence and police work to keep tabs on potential terrorists. We also, apparently, get legions of newly minted terrorism trainers like Ramon Montijo: “What he tells them is always the same, he said: Most Muslims in the United States want to impose sharia law here.” Lovely.