Brad Plumer has a useful piece today about  Sen. Tom Coburn’s “Wastebook 2010,” which allegedly exposes massive amounts of waste, fraud and abuse in the federal budget. You should read it, but I want to add a separate comment.

Nearly all WFA discussions fall victim to the Really Big Country problem. That is, the United States is a really big country, which means that no matter what kind of weird pathology you go looking for, you’ll always find a fair amount of it. Or, more accurately, you’ll find 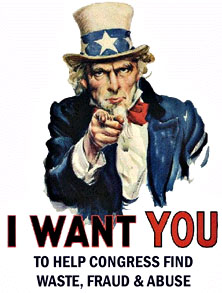 what seems to be a fair amount but really isn’t. It’s why so many parents worry about their kids being snatched off the street by strangers: only about a hundred abductions a year fall into this category, which seems like a lot. But in a country of 300 million, that’s actually about as big as the number of people killed each year by lightning strikes. It’s incredibly rare. [See update below.]

I’d venture to guess that barely any organization in human history has managed to reduce WFA below about 2%. If you earn $50,000 a year, that means waste of $1,000. Even careful households probably piss away that much each year. If you run a million-dollar small business, it means waste of $20,000 a year. Again: even a very miserly small business probably loses that much. It’s just impossible to keep track of every expenditure, monitor every employee every minute of the day, or make sure you get the best price on every possible purchase.

Probably no one would argue too much about this because these numbers are human size. An average family blows a hundred bucks a month on dumb stuff? Sure. A business with half a dozen employees makes $20,000 worth of mistakes each year? Sure. But what about a federal government that spends upwards of $3 trillion per year? The same rate of WFA amounts to $50 billion or more. Or, using the usual budget window, $500 billion over ten years. That seems like an outlandish amount, but it’s actually the same 2% as everyone else.

None of this is to say that we shouldn’t fight this stuff. Families should, small businesses should, and the government should. Hell, Coburn’s book might be a public service. But even if we do a rip-roaring job of fighting WFA and run the cleanest government in human history, any decent investigator will still probably be able to find at least 2% waste in the system. It seems like a huge amount, but it’s largely a mirage based on people getting fooled by numbers too big for human comprehension. This happens a lot in modern society.

UPDATE: This doesn’t really affect the main point of the post, but I was off base on the abduction figure. It’s based on a 2002 report by David Finkelhor, which estimates 115 abductions per year “perpetrated by a stranger or slight acquaintance and involving a child who was transported 50 or more miles, detained overnight, held for ransom or with the intent to keep the child permanently, or killed.”

However, a definition that includes any kind of abduction, even those lasting only a few minutes or a few hours, brings the tally up to 58,000 per year — and obviously parents are concerned about these kinds of abductions too. Some of them are what you’d think of as child snatchings and some aren’t, but in any case the number is far higher than 115. Using the broader definition, the odds of having your child snatched is (depending on how broadly you cast your net) one in a thousand or less, which is quite low but still nowhere near the odds of being struck by lightning.