James Joyner — joining a cast of millions — complains that cable news coverage of Egypt has been terrible. If you want to know what’s going on, you have to watch al-Jazeera. Then this:

It’s not exactly that private news channels can’t do a fantastic job. ABC, NBC, and CBS did so within my memory. And CNN did so even more recently. But they did so under quasi-monopoly conditions….But, with the proliferation of cable, Americans were increasingly choosing to watch something other than news: game shows, re-runs, SportsCenter, or whathaveyou.

With the incentive gone, news programming began to be viewed as an expense, and the networks largely did away with foreign coverage. Not only is it expensive to produce, but Americans generally don’t care about it unless there’s a crisis. But, since by definition we don’t know where crises will break 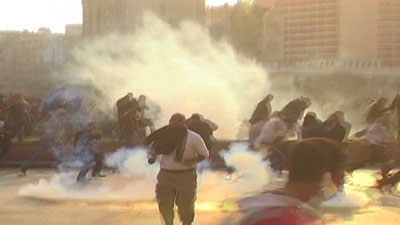 out ahead of time, it’s cheaper to simply parachute in to cover them. And hard news began to soften, including more human interest stories and politics-as-sports coverage.

I’ve watched no news coverage of any kind for the past four days and therefore have no idea what network coverage has been like. But I think this deserves a bit of perspective that’s independent of what these guys are doing. So here it is: what we’re seeing is not the superiority of al-Jazeera in its approach to covering the news. What we’re seeing is the fact that we’re in the middle of an uprising in the Middle East and that happens to be something that al-Jazeera is very, very well situated to cover. Conversely, if I wanted news about the Super Bowl, I’d turn to ESPN. For news about the repeal of healthcare reform, CNN would probably be pretty good. For news about Jerry Brown’s upcoming State of the State address in California, one of my local news stations would be best.

There’s no question that American cable nets — along with virtually all of the rest of the American media — suck very badly at covering international news. I’d love to blame them for this state of affairs, but I think that’s kind of unfair. The problem is that Americans have voted with their pocketbooks and announced in a loud and sustained voice that they don’t really care about international news unless it happens to be either (a) a U.S. war or (b) some kind of disaster story like Haiti or the Chilean miners. Given that, it’s hardly reasonable to expect CNN or Fox to run a money-hemorrhaging charity operation for those few of us who care about this stuff.

And I’ll add one more thing: maybe, just maybe, up-to-the-nanosecond coverage isn’t really all that important? If you’re transfixed by this stuff, that’s fine. No one begrudges it. But really, is there any compelling reason why a TV network should be broadcasting continuous coverage of something like this? If you don’t find out for three or four hours that Hosni Mubarak replaced his cabinet, does it matter? And does following events on Twitter, where the signal-to-noise ratio is about 1%, really improve your understanding of what’s happening?

I doubt it. But that still doesn’t excuse the atrocious quality of analysis on the cable nets. Since I haven’t watched it — except for a few minutes of Fox one morning in which they were obsessed with the Muslim Brotherhood — I can’t say anything about it from personal experience. But I trust James when he says it’s awful, and there’s not much excuse for that. Giving Egypt a couple of hours a day instead of 24/7 treatment seems fine to me, but at the least, those couple of hours ought to be good stuff.