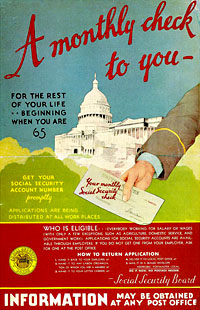 Digby reposts a summary today of last year’s “Fiscal Responsibility Summit,” in which Gene Sperling — now a top contender to replace Larry Summers as head of the NEC — said the Obama administration was interested in cutting a deal on Social Security, and warns against taking the bait:

I know I’ve posted that too often and regular readers are sick of it. But it’s terribly important, I think, to understand that the rationale for liberals in this thing is that they are doing a good thing for the program, taking it “off the table” for the next 50 years and “making it sound.” Now, I don’t know if they really believe it, but it doesn’t matter. What matters is that in the current environment whatever changes they come up with will come at the expense of the elderly because there will be no deal that requires tax hikes.

I don’t know why some liberals think that there is some deal, good or bad, which can somehow take the Social Security issue off the table until the end of time. As Ben Bernanke said, that’s where the money is and they’ll be trying to steal it in perpetuity. Cutting granny’s benefits a bit won’t change that.

I just don’t think this is true. It’s possible that Republicans will never agree to a Social Security deal that increases taxes, but keep in mind that Republicans are mainly obsessed with taxes on the wealthy. A small increase in payroll taxes and/or an increase in the payroll tax cap wouldn’t affect the millionaire class much and might get a fair amount of GOP support. In any case, the only way to find out is to try. If they won’t do the deal, then they won’t do the deal.

But assume that a deal is possible. If it is, I think it’s wrong to insist that it will come solely at the expense of the elderly, or that it won’t do any good because Social Security will never be off the table anyway. On the first point, it’s quite possible to structure a deal that requires nothing more than a very modest slowdown in the the future increase of benefit levels that (a) affects only those with fairly high incomes and (b) phases in over a period of decades. That’s hardly Armageddon. On the second point, sure, Republicans will probably go after Social Security forever. But that’s not what matters. What matters is that if the program is officially in balance then Republicans no longer have the traction to succeed. Benefit cuts are unpopular, after all, and conservatives by themselves don’t have either the desire or the ability to buck the public on this unless they also have the support of the Washington Post/Pete Peterson Beltway elite. And they won’t have that once the program is officially solvent. A deal on Social Security kicks the legs out of the centrist support they need in order to have any chance of reducing benefits in the future.

Now, again: maybe a deal isn’t possible. There’s only one way to find out. But if a deal is possible, it really would take Social Security off the table for a very long time. That would be good for the elderly, good for the country, and good for the liberal project in general. If there’s any chance of doing a bipartisan deal over the next two years, Democrats should be open to it.