Why did unemployment spike so sharply and recover so much more slowly than GDP during the current economic recovery (as well as every other recovery of the past 30 years)? I suggested this morning that part of the reason had to do with the demise of union contracts in particular and the more general social contract that followed from them: to some extent, firms in the past didn’t immediately fire workers during a downturn simply because they were expected not to. Today that social contract is dead. Paul Krugman adds another guess:

The key point for productivity here may be that engineering a recovery from postmodern recessions is much harder than engineering a recovery from a recession more or less deliberately inflicted by the Fed; and as a result the recoveries tend to be long flat U’s rather than the V-shaped recoveries of yore. And to the extent that firms know this, they have less reason to hoard labor; they’re not going to need those laid-off workers for a long time.

Nick Rowe adds another point: perhaps our current recovery featured outsized unemployment because it was so concentrated in the construction sector. Unlike some industries, where you want to hold onto workers because their 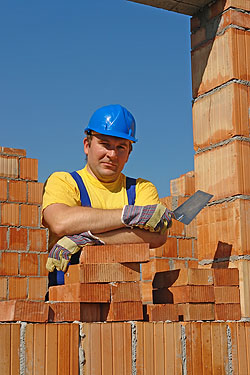 skills might be hard to find when the economy bounces back, construction skills are easy to find:

But if your workers have general human capital, it doesn’t matter if you lose them. You can lay off all your bricklayers in a recession, and just hire new bricklayers when demand returns. My guess is that the construction trades require a lot of general human capital and very little firm-specific human capital. Two building sites can swap bricklayers easily, with minimal re-training. “Welcome to your new job. The Porta-Potty is over there. Start laying bricks here”. Am I right?

Let’s combine these two observations. In the postwar period, I don’t think it’s quite right to say that recessions were deliberately inflicted by the Fed. Rather, they were largely inflicted by the automatic operation of Regulation Q, which imposed caps on the interest rate that banks and S&Ls could pay on deposits. When economic expansions got a little too robust, and inflationary pressures pushed market rates on treasury bills and corporate debt above Regulation Q ceilings, depositors would withdraw their funds from banks and invest them elsewhere. This loss of deposits caused an immediate shutdown in the mortgage market, which in turn caused an immediate turndown in the construction market. This cooled down the economy, and eventually market rates declined and money flowed back into banks. Next stop: recovery.

In other words, we have plenty of experience of recessions caused by a turndown in the construction market. For over 20 years, this was the primary lever by which the economy was managed, and it didn’t cause long, jobless recoveries. It’s true that the construction industry and organized labor didn’t much care for this system, but they accepted it anyway because it so patently worked well as a countercyclical economic tool. (It’s long gone, of course. Regulation Q disappeared in the 70s, a victim of inflation and financial market deregulation.)

So what’s the difference between then and now? The construction sector is crucial to both eras, but the difference is that Regulation Q was so effective: it shut down the credit market at the first sign of irrational exuberance, but it also eased up at the first sign of recession. Everyone knew this, which I imagine gave firms a certain amount of confidence that postwar downturns would be sharp but short.

Our current downturn offers no similar assurance. The credit market got far, far out of hand before the 2008 crisis cut it off at its knees, and there’s no longer anyone or anything that can wave a magic wand and bring the construction industry back to life. And once again, everyone knows this. Back in 2008 there was no reason to think that the construction industry was going to recover soon, and no reason to think it would fuel a more general recovery even if it did. So firms hunkered down for a long downturn and laid off as many workers as they could.

All of which is a long way of saying that I’m not sure construction holds the key to anything this time around. There was a huge collapse of credit throughout the economy in 2008, and every sector is now engaged in a long, slow process of deleveraging. Given the uncertainty surrounding this mechanism of recovery, it strikes me as unsurprising that firms are reluctant to rehire.