Joshua Tucker makes an argument today that Tunisia might be the leading edge of a broader revolt in the Middle East, just as Poland was the leading edge of the fall of communism in Eastern Europe in 1989. But then I think he undermines his own case:

One fundamental difference that I can not help noting between 1989 and 2011, however, is the lack of a powerful external actor enforcing the non-democratic regimes in the Middle East. East-Central European communist propaganda notwithstanding, few probably doubted by the 1980s the most of the region would throw off communism if Moscow ever gave them the opportunity to do so. Thus perhaps the most crucial information transmitted by the success of the Polish and 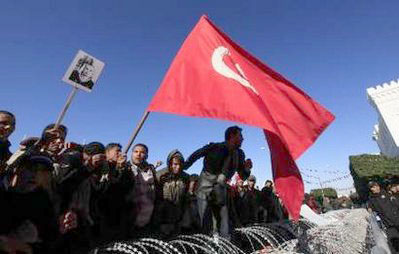 Hungarian revolutions was precisely the fact that the Russians were not planning on intervening. I’m not sure there is anything analogous in place in the Middle East.

I’m no expert on 1989, but I think it’s hard to overstate the importance of Mikhail Gorbachev in all this. For a variety of reasons, he chose not to intervene to prop up the communist regimes in Eastern Europe, as his predecessors had done in 1956 and 1968, and that made all the difference. If Soviet tanks had rolled into Warsaw or Prague, there’s no telling how much longer the Iron Curtain would have remained standing.

It’s pretty unlikely that anything similar will happen in the Middle East. After all, its leaders know the lesson of 1989 just as well as we do. As Marc Lynch puts it, “Dictators learn from each other, not just from the past.” Still, after ticking off all the reasons that the Tunisian revolt probably won’t spread successfully, he says that skepticism sounds a bit hollow this time:

There are plenty of reasons to see Tunisia as a one-off. And yet… it doesn’t feel that way. The scenes in Cairo yesterday stand as a sharp rebuke to any analytical certainty. The Egyptian regime was fully prepared, its security forces on alert and deployed, the internet disrupted and al-Jazeera largely off the table… and yet tens of thousands of people still poured into the streets and put together one of the largest demonstrations in contemporary Egyptian history.

Tunisia has manifestly inspired people across the region and galvanized their willingness to take risks to push for change, even without any clear leadership from political parties, Islamist movements, or even civil society. The Tunisian example has offered the possibility of success, and models for sustained action by a decentralized network, after a long and dispiriting period of authoritarian retrenchment. Al-Jazeera and the new media have played their role in reshaping political opportunities and narratives, but it is people who have seized those opportunities. And the core weaknesses of these Arab states — fierce but feeble, as Nazih Ayubi might have said — have been exposed. They have massively failed to meet the needs of their people, with awesome problems of unemployment, inflation, youth frustration and inequality combined with the near-complete absence of viable formal political institutions.