Aaron Carroll has had it with people insisting that it’s OK for the United States to spend so much on healthcare because, after all, we have the best healthcare in the world. You get what you pay for, and at 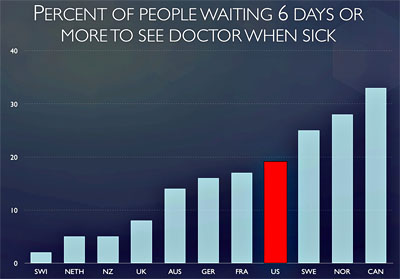 least we don’t have to wait forever to see a doctor, like they do in other countries, right?

Actually, no. As the chart on the right shows, we have longer wait times than most:

Let’s own something right up front. We beat Canada. Let me say that again: WE BEAT CANADA. There’s a reason people always cherry pick Canada to talk about wait times. But many, many other countries do better in terms of getting people in to see the doctor when they are sick.

….People in the US feel like their doctors don’t know them. Why could that be? One reason is that more people feel like they don’t get enough time with the doctor. Since we’re so obsessed with wait times (even though we don’t do very well in winning that battle), doctors are forced to see more patients every day in order to avoid them. So, yes, you might not wait as long to see your doctor, but when you get there, he or she won’t have much time for you.

One of the reasons for this is that we have so few doctors in this country….And that’s after spending way, way, way more money than anyone else. How is this defensible? We’re failing. We really are. I have no problem with disagreement on how to fix the system, but it’s hard to believe so many of you want to defend the status quo.

As someone who just waited six weeks to see my doctor, I get this. It’s not that I had to wait six weeks. I could have gotten in sooner if I’d been willing to see someone else in my doctor’s practice. But that’s not much better. If I see doctors randomly, none of them ever get to know me, and experts are forever telling us how important it is to build a long-term relationship with your doctor.

Of course, one of the reasons I like my doctor is that she doesn’t routinely hustle me out of her office as if she’s late for a golf date, the way my previous doctor did. The downside is that she’s always running late and it’s hard to get in to see her. This in turn is almost certainly because she has a high patient load, so her only options are to either run late or make sure appointments are never more than five minutes long. That’s not exactly a great set of options.

And yes, I have good insurance. This isn’t something that just happens to Medicaid patients. The fact is that we just don’t have a very good healthcare system in the United States. You might be able to get a hip replacement here faster than you can in Canada, but there’s a lot more to healthcare than that. And on most metrics, we do pretty poorly.