Wisconsin’s public sector unions are the ones in the news right now, but it’s private sector unions that have shriveled away almost to nothing over the past several decades. In the current issue of Mother Jones, I tell the story of that decline and how it’s affected the Democratic Party, changing it from a party that represented the working and middle classes without apology into one torn between its New Deal heritage and its modern funding base:

As unions increasingly withered beginning in the ’70s, the Democratic Party turned to the only other source of money and influence available in large-enough quantities to replace big labor: the business community. The rise of neoliberalism in the ’80s, given concrete form by the Democratic Leadership Council, 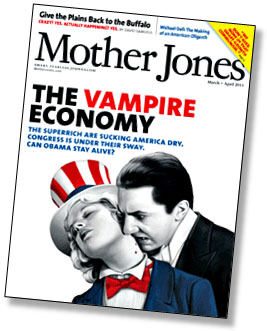 was fundamentally an effort to make the party more friendly to business. After all, what choice did Democrats have? Without substantial support from labor or business, no modern party can thrive.

….It’s impossible to wind back the clock and see what would have happened if things had been different, but we can take a pretty good guess. Organized labor, for all its faults, acted as an effective countervailing power for decades, representing not just its own interests, but the interests of virtually the entire wage-earning class against the investor class. As veteran Washington Post reporter David Broder wrote a few years ago, labor in the postwar era “did not confine itself to bread-and-butter issues for its own members. It was at the forefront of battles for aid to education, civil rights, housing programs and a host of other social causes important to the whole community. And because it was muscular, it was heard and heeded.” If unions had been as strong in the ’80s and ’90s as they were in the ’50s and ’60s, it’s almost inconceivable that they would have sat by and accepted tax cuts and financial deregulation on the scale that we got. They would have demanded economic policies friendlier to middle-class interests, they would have pressed for the appointment of regulators less captured by the financial industry, and they would have had the muscle to get both.

And that means things would have been different during the first two years of the Obama era, too. Aside from the question of whether the crisis would have been so acute in the first place, a labor-oriented Democratic Party almost certainly would have demanded a bigger stimulus in 2009. It would have fought hard for “cramdown” legislation to help distressed homeowners, instead of caving in to the banks that wanted it killed. It would have resisted the reappointment of Ben Bernanke as Fed chairman. These and other choices would have helped the economic recovery and produced a surge of electoral energy far beyond Obama’s first few months. And since elections are won and lost on economic performance, voter turnout, and legislative accomplishments, Democrats probably would have lost something like 10 or 20 seats last November, not 63. Instead of petering out after 18 months, the Obama era might still have several years to run.

For three reasons, I hope you’ll read the whole thing. First, because you can’t really appreciate what’s happening in Wisconsin without first understanding what’s happened to organized labor as a whole over the past 50 years. Second, because understanding this history is important for its own sake. It is, I believe, the single most fundamental political story of our era.

Third, and most important, if you don’t read it all you’ll probably think this is just another cri de coeur for the restoration of a lost age of labor activism. It’s not. What it is about is, as I say in the final sentence, “the central task of the new decade” for progressives. This is something that, after reading the whole thing, you might not buy. But right now, whether we want to admit it or not, the progressive movement is on life support. If I’m wrong, we’d sure better figure out what’s right.