Michael Hastings, the guy who General Stanley McChrystal talked to a little more freely than he should have last year, has another big story in Rolling Stone today. He reports that the officer in charge of psy-ops in Afghanistan 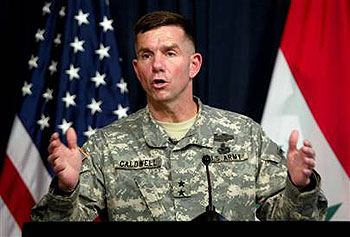 was ordered to use his team to spin visiting American dignitaries instead of Afghan tribal leaders:

The orders came from the command of Lt. Gen. William Caldwell, a three-star general in charge of training Afghan troops — the linchpin of U.S. strategy in the war. Over a four-month period last year, a military cell devoted to what is known as “information operations” at Camp Eggers in Kabul was repeatedly pressured to target visiting senators and other VIPs who met with Caldwell. When the unit resisted the order, arguing that it violated U.S. laws prohibiting the use of propaganda against American citizens, it was subjected to a campaign of retaliation.

“My job in psy-ops is to play with people’s heads, to get the enemy to behave the way we want them to behave,” says Lt. Colonel Michael Holmes, the leader of the IO unit, who received an official reprimand after bucking orders. “I’m prohibited from doing that to our own people. When you ask me to try to use these skills on senators and congressman, you’re crossing a line.”

….What Caldwell was looking for was more than the usual background briefings on senators. According to Holmes, the general wanted the IO team to provide a “deeper analysis of pressure points we could use to leverage the delegation for more funds.” The general’s chief of staff also asked Holmes how Caldwell could secretly manipulate the U.S. lawmakers without their knowledge. “How do we get these guys to give us more people?” he demanded. “What do I have to plant inside their heads?”

According to experts on intelligence policy, asking a psy-ops team to direct its expertise against visiting dignitaries would be like the president asking the CIA to put together background dossiers on congressional opponents. Holmes was even expected to sit in on Caldwell’s meetings with the senators and take notes, without divulging his background. “Putting your propaganda people in a room with senators doesn’t look good,” says John Pike, a leading military analyst. “It doesn’t pass the smell test. Any decent propaganda operator would tell you that.”

….Under duress, Holmes and his team provided Caldwell with background assessments on the visiting senators, and helped prep the general for his high-profile encounters….In March 2010, [Col. Gregory] Breazile issued a written order that “directly tasked” Holmes to conduct an IO campaign against “all DV visits” — short for “distinguished visitor.”…On March 23rd, Holmes emailed the JAG lawyer who handled information operations, saying that the order made him “nervous.” The lawyer, Capt. John Scott, agreed with Holmes. “The short answer is that IO doesn’t do that,” Scott replied in an email. “[Public affairs] works on the hearts and minds of our own citizens and IO works on the hearts and minds of the citizens of other nations. While the twain do occasionally intersect, such intersections, like violent contact during a soccer game, should be unintentional.”

It’s worth noting that this story is essentially single-sourced to Holmes, who was later investigated and reprimanded for “going off base in civilian clothes without permission, improperly using his position to start a private business, consuming alcohol, using Facebook too much, and having an ‘inappropriate’ relationship with one of his subordinates.” Holmes says the reprimand was retaliation for refusing to break rules, but there’s no independent verification of that. There’s always the mirror-image possibility that Caldwell did nothing wrong and Holmes is merely trying to get back at him for the reprimand.

That said, Holmes’s story sounds pretty plausible. More to come on this, I’m sure.