The DC school system under Michelle Rhee famously produced substantial gains on standardized test scores. But USA Today reports that one of the district’s star performers, the 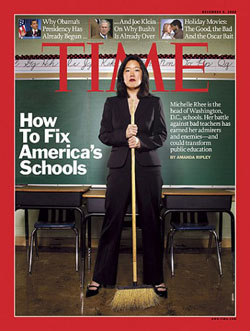 Crosby S. Noyes Education Campus, may have cheated its way to success:

A USA TODAY investigation, based on documents and data secured under D.C.’s Freedom of Information Act, found that for the past three school years most of Noyes’ classrooms had extraordinarily high numbers of erasures on standardized tests. The consistent pattern was that wrong answers were erased and changed to right ones.

….On the 2009 reading test, for example, seventh-graders in one Noyes classroom averaged 12.7 wrong-to-right erasures per student on answer sheets; the average for seventh-graders in all D.C. schools on that test was less than 1. The odds are better for winning the Powerball grand prize than having that many erasures by chance, according to statisticians consulted by USA TODAY.

….At Noyes, USA TODAY found several grades with wide swings in their proficiency rates from one year to the next. In 2008, 84% of fourth-grade math students were listed as proficient or advanced, up from 22% for the previous fourth-grade class.

Wow. Going from 22% to 84% in one year is suspiciously impressive. And it’s not just Noyes:

In 2008, the office of the State Superintendent of Education recommended that the scores of many schools be investigated because of unusually high gains, but top D.C. public school officials balked and the recommendation was dropped.

After the 2009 tests, the school district hired an outside investigator to look at eight D.C. public schools — one of them was Noyes, USA TODAY learned — and to interview some teachers.

….School district officials would not release the reports Caveon compiled. Caveon has been hired again to investigate the results of 2010 tests in which 41 DCPS schools, including Noyes, had at least one classroom flagged for high erasure rates. USA TODAY could not determine which schools are being scrutinized

It’s impossible to prove malfeasance based just on erasure rates. As the story notes, there are sometimes legitimate reasons for lots of erasures.1 But the pattern here sure seems to follow a pattern we’ve seen in other school districts that have reported startling test gains and later had to recant them for one reason or another. For more, read the whole piece, which is long but worth plowing through.

1For example, kids might be trained to carefully review their answers after they’ve finished the test. The problem here is that conventional wisdom in the ed community recommends that you never change an answer on a multiple choice test unless you’re absolutely sure you got it wrong. More often than not, your first answer is the right one. So even with a careful review, it would be very unusual to see a high number of wrong-to-right erasures.