Earlier today, I linked to a Ryan Avent post complaining that although dense cities like New York are much greener than towns and suburbs, his lefty, environmentally-aware neighbors fight against new high-density developments in the city anyway. 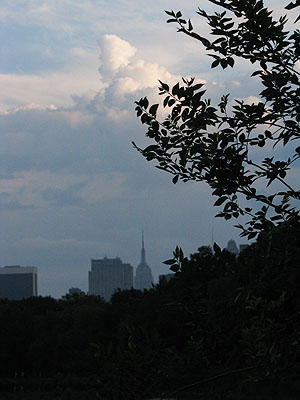 A little later, I had an email exchange with HW, a lefty, environmentally-aware New Yorker who thinks Ryan has it all wrong. Here’s the exchange:

HW: It is true that people living in NY have much much lower carbon footprints than those who live in lower density areas. It’s also true that it is a highly desirable place to live. So wouldn’t the way to accomplish more people living in high density areas like NY be to replicate it elsewhere? Or should we insist on cramming more people into NY against NYers’ will and make it a less desirable place to live?

Wouldn’t it be better for 8 million people to live in NY and have it serve as a beacon for a great, lower carbon footprint lifestyle? If you cram an extra million people in, sure, you lower their carbon footprints, but you may also make high density urban living far less attractive and less likely to be replicated around the country.

Avent mentions problems with parking and traffic as a throw-away, but I can tell you, the 4-5-6 running up from midtown to the Upper East Side is quite literally crammed wall-to-wall with people every morning. Parking is unlikely to be an option for anyone unwilling to spend several hundred dollars a month. And yes, another ten skyscrapers will result in the city becoming a darker and more depressing place. Not to mention the fact that the last ten high rises that went up on the Upper East Side were creatures of the housing bubble, resulting in massive losses and lots of empty units.

So would it be so terrible if we built up the downtown areas of Jersey City, White Plains and Stamford instead?

My reply: Well, that’s the funny thing. Building new high-density areas is the obvious answer here, but no one ever does it. Why? I assume it’s because it’s next to impossible to get people to move to new high-density developments. You get all the bad aspects of density without any of the good aspects of living in a big, well-established city.

It’s a conundrum. We could use more well established cities, but no one wants to live in the intermediate stages that it takes to build one. And of course, in well-established smaller towns and cities, the residents fight like crazed weasels to prevent the kind of development that they associate with crime and gangs.

I don’t really know what the answer is.

HW again: I’m not sure that’s entirely true. What about all the downtown redevelopment projects that have happened around the country? Or the urban centers that sprout up around the core of big cities like NY. Next time you are in NY, look across the East River and take a gander at Long Island City. It’s as close to midtown as the Upper East Side, easy to build there, far less expensive, and just as dense. And every single one of those luxury high rises went up in the past 12 years; it’s literally a skyline that didn’t exist 12 years ago. Jersey City is a similar story, both for residential and financial (every big bank has moved their IT back office out there). Or look at the gentrification of Brooklyn!

So why obsess on cramming a couple hundred thousand more people on the island of Manhattan, which will push it past the bursting point? It’s just not a smart premise. In fact, I’ll go further: it bears no relationship to reality. No one would stop a luxury high rise in any of the other four boroughs or right across the river in NJ and it’s just as dense and low-carbon to live in those spots. It’s just that Ryan Avent doesn’t WANT to live in those spots. He wants to live in a cheaper high rise in Manhattan (which, by the way, has seen tons of them go up already in the past decade — in the Financial District, Hell’s Kitchen, the Upper East Side). Avent should ride the 4/5/6 at 8 am every morning for a week, come back, and tell us if his article makes any sense. As a 4th generation NYer, I don’t think it even begins to.

I don’t really have a dog in this fight since I’ve lived in the leafy suburbs of Orange County all my life. But I thought this was an instructive response that was worth sharing. Back to you, Ryan.