Actually, this is a tale of three versions of the same chart. The first one comes from John Taylor and shows fixed investment plotted against unemployment from 1990 to the present: 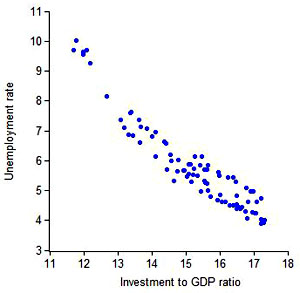 This is a very striking correlation, and Taylor jumps to an immediate conclusion, namely that “the most effective way to reduce unemployment is to raise investment as a share of GDP.” Because of this, he applauds the recent move to “lighten up on the anti-business sentiment coming out of Washington.” But Justin Wolfers isn’t so sure. Why start at 1990? What happens if you use the full time series all the way back to 1948? You get this: 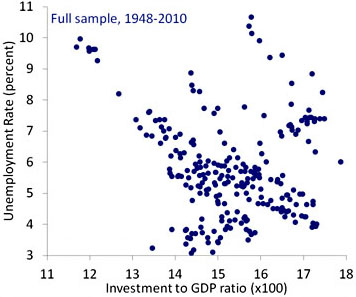 Wolfers concludes that Taylor’s correlation is spurious, “advocacy, dressed up as science.” If you look at a longer timeframe, there’s virtually no correlation at all.

But Paul Krugman thinks the 1990-2010 data is worth looking at. However, after decomposing it, he concludes that the recent plunge in fixed investment is mostly due to the collapse of the housing bubble. Business investment isn’t doing badly at all — and in any case, surely the causation runs in the other direction, with unemployment affecting investment? So he flips the axes, replots the data to look at business investment only, and then Brad DeLong dresses up the chart a bit. Here’s what he gets: 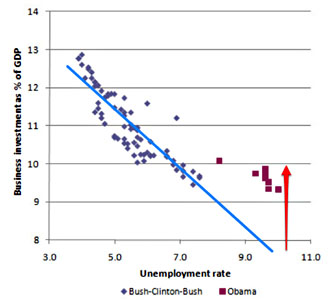 Brad’s conclusion: not only is business investment a “bit stronger” right now than you’d expect from the data, it’s “substantially stronger. 2% of GDP stronger — that’s $300 billion a year more in business investment than we would have expected to see with the unemployment rate this high.”

Interesting! But I have an entirely different question. First: why did the correlation change so dramatically right around 1990 or so? Second: why did it apparently change again right around 2009? Brad attributes the 2009 break to changes in policy:

Had there been no fiscal and banking rescue policies and if investment had not been boosted by policy, the unemployment rate might as a result be at the 16% of the Blinder-Zandi Republican policy baseline, and only THE ONE WHO IS knows how low business investment spending would be — but it would surely be a lot lower than it is now.

But what about the break around 1990? What accounts for that? Or, perhaps more pertinently, what was it about 1990-2007 that was different from both the period before and after?