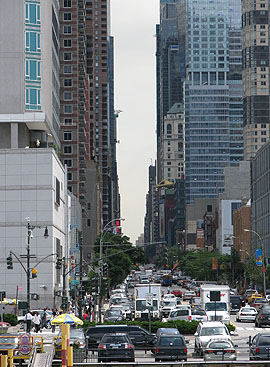 Ryan Avent says that while bike lanes are great, the mere existence of big cities like New York is far more important than details like bike friendliness:

Happily, lots of people would LOVE to move to New York. This is one huge benefit we don’t need to subsidize to realize. Unhappily, the benefit is nonetheless out of reach because of the huge obstacles to new, dense construction in New York. New York can’t accommodate more people unless it builds more homes, and it can’t build more homes, for the most part, without building taller buildings. And New Yorkers fight new, tall buildings tooth and nail. They fight them on aesthetic grounds, and because they’re worried about parking and traffic, and because they’re worried about their view, and because they just think there’s enough building in New York already, thank you. And many do this while heaping massive scorn on oil executives and the Republican Party over their backward and destructive views on global warming.

….My old neighborhood, Brookland, voted overwhelmingly for Obama (about 90-10, as I recall). Many of the locals are vocally supportive of broad, lefty environmental goals. And yet, when a local businessman wants to redevelop his transit-adjacent land into a denser, mixed-use structure, the negative response is overwhelming, and residents fall over themselves to abuse local rules in order to prevent the redevelopment from happening.

For what it’s worth, I’d dial down the scorn and take this as an opportunity. Here’s the thing: my guess is that virtually nobody in the country thinks that cities are greener places than towns or suburbs. And by “virtually nobody,” I mean maybe a few percent tops. For most people, it’s wildly counterintuitive on all sorts of levels to think of big, dirty, crowded, urban areas as “green.” It just doesn’t compute.

The downside of this is that urbanophiles have a huge uphill battle ahead of them to change people’s minds. The upside is that there’s no place to go but up. It might take years or decades, but there’s a genuine opportunity to educate the public over the long term and change the way they think about density. And this in turn represents a genuine opportunity to change the way Ryan’s lefty friends think about developers who want to put up dense new buildings.

It won’t happen quickly, but frankly, there aren’t all that many areas where educating the public has much chance of changing things at all. At least in this case the opportunity is there.