Since healthcare is the topic du jour, but Paul Ryan’s Medicare plan doesn’t really include enough detail to allow more than obvious critiques, here’s a short post on an entirely different healthcare topic.

Ryan’s budget document contains the chart on the right. Scary! It’s based on CBO data, and it’s a pretty standard fixture in healthcare debates. Basically, it shows Medicare 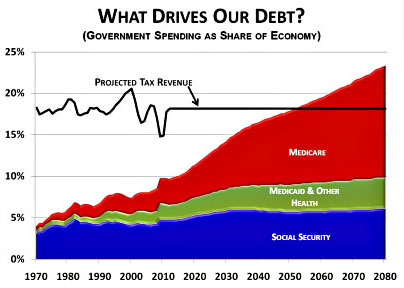 spending rising at 8% a year forever, which means that eventually it overwhelms everything else and the country is broke. But how likely is that?

I don’t mean likely in just the Steinian sense that, eventually, costs will be reined in simply because they have to be. I mean that I wonder if we’ve been brainwashed by the exploding costs of healthcare over the past 40 years into thinking that exploding costs are somehow inevitable in the healthcare field forever. Are they?

I can think of lots of technological revolutions that were pretty costly at first but eventually reached a point where they leveled out and then became cheaper. In fact, pretty much all of them. But perhaps healthcare is different in some ways from previous technological revolutions? For one, it’s fairly labor centric and likely to stay that way. For another, costs really have been going up for a long time and there’s not much relief in sight. By now, you’d think we’d be nearer the cusp of the curve where costs start going down, but we sure don’t seem to be. New pharmaceuticals are as expensive to develop as ever. Cancer treatments keep getting more costly, as the construction of $100 million proton therapy centers demonstrates. And overall per capita healthcare costs just keep climbing inexorably.

Still: do we really think this is going to keep up forever? If it does, it will be pretty much the first time in history. I’m enough of a technological optimist (and a believer in the power of markets) to guess that someday — 10 years? 20? 30? — things like gene therapies, personalized pharmaceuticals, medical AI, and so forth are finally going to revolutionize medicine. And when that happens, costs will plateau at first and then drop. The curve simply won’t keep going up forever.

Now, granted, we can’t plan on that. There are no guarantees, after all, and maybe medicine will end up being an exception to the usual rule of technological progress. What’s more, folks like Paul Ryan could plausibly claim that this makes voucher plans like his more reasonable: if costs don’t come down, then we’ll have little choice but to cap them bluntly the way his plan does. And if they do come down, then his caps won’t have a serious impact.

I don’t really have a position here. I’m just musing out loud about the likely future trajectory of healthcare, and whether we’re really looking at it through the right lens. Right now we’re tacitly assuming that what’s happened in the past will inevitable keep happening into the far future. But there’s really not much reason to think that’s true. Is there?