Ben Wallace-Wells has a nice profile of Paul Krugman in New York magazine this month, and it’s worth a read. For some reason, though, it prompted me to reread my interview of Krugman from back in 2003. Here’s a snippet 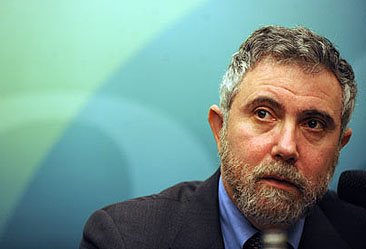 of our conversation that picks up at a point where we were talking about long-term economic woes and the Republican desire to slash entitlement programs:

I don’t think politically you can cut those programs.

Train wreck is a way overused metaphor, but we’re headed for some kind of collision, and there are three things that can happen. Just by the arithmetic, you can either have big tax increases, roll back the whole Bush program plus some; or you can sharply cut Medicare and Social Security, because that’s where the money is; or the U.S. just tootles along until we actually have a financial crisis where the marginal buyer of U.S. treasury bills, which is actually the Reserve Bank of China, says, we don’t trust these guys anymore — and we turn into Argentina. All three of those are clearly impossible, and yet one of them has to happen, so, your choice. Which one?

Well, how about your choice? What’s your best guess?

I think financial crisis, and then how it falls out is 50-50, either New New Deal or back to McKinley, and I think it’s anybody’s guess which one of those it is….I don’t see any noncatastrophic solution to this, I don’t see an incremental stepwise resolution. I think something drastic is really going to happen.

….What happens if [] foreign countries stop buying U.S. bonds? Is this a real concern, or a tinfoil hat kind of thing?

Oh, I don’t think China is going to do it to pressure us. You can just barely conceive of a situation where they’re mad at us because we’re keeping them from invading Taiwan or something, but more likely they just start to wonder if this is really a good place to be putting their money.

So what happens is a plunge in the dollar when they decide to stop buying and start cashing in, and a spike in U.S. interest rates. But you might also get in a situation where the interest rates the government has to pay to roll over its debt become so high that you get an accelerating problem, which is what happened in Argentina. What happened was that suddenly no one would buy Argentine debt unless they paid a twenty something percent interest rate, and everybody says, but if they have to roll over their debt at a twenty percent interest rate, there’s no way they can pay that back. So the whole thing grinds to a halt and the cash flow just dries up.

….If you were king of the economy, what’s the Krugman plan?

A phased elimination of all the Bush tax cuts, plus some additional taxes. I’d probably look first at some way to make the corporate profits tax actually effective again — the nominal rate is 35% but the effective rate is only 15% or so. Look at some cuts, maybe you start to talk about retirement age, and possibly some means testing of Medicare, and that’s enough to bring the budget under control.

Obviously the financial crisis of 2008 has intervened since then, but I wonder how much of this still represents Krugman’s current thinking?