A friend of mine who’s fed up with Obama emailed to respond to my suggestion that Obama’s real intentions remain fairly enigmatic:

I agree completely that Obama is enigmatic, but at some point, it doesn’t really matter whether he gave away something he really believed in or never believed it in the first place. Does it matter in practical terms whether he’s pathetically weak or just a bald-faced liar? After this long, I have a really, really, really hard time believing his 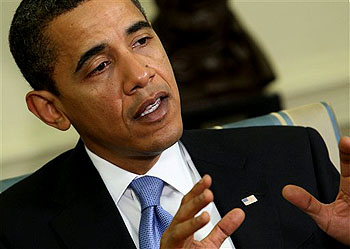 heart is in what I’d call the right place on any of this stuff since no matter his brave words when he was angling for the nomination, he’s basically given it all away, one thing after another.

This critique of Obama I don’t really get. Sure, Obama’s not the second coming of FDR (though FDR himself wasn’t really the first coming of FDR either), but he got a fair amount done in his first two years, and if the healthcare reform bill was a dog’s breakfast of concessions to special interests, well, that’s the way Washington works. Obama was never going to change that in the space of 18 months. And I just don’t see the case for lying. He’s failed to get his way on some things, he’s compromised other things away, and yes, he’s occasionally just plain done an about face. But if I had to judge, I’d say he’s done the latter less than most presidents, not more.

But then there’s this critique from Ezra Klein, which strikes me as very much on the mark:

The battle over funding the government for the rest of 2011 has gone on for months, but the most involvement we’ve seen from Obama was a few phone calls placed to negotiators over the weekend….With negotiations breaking down, Obama has invited congressional leaders to the White House to hammer out a deal — but at this point, the question is simply how bad the final agreement will be.

But perhaps more disappointing are the times the president has shown up. Last week, Obama laid out his first major energy plan since the campaign….[It] was a terrible disappointment. Forget the ambitious cap-and-trade proposal that candidate Obama pushed in 2008. President Obama’s energy plan undershot the cap-and-trade plan that John McCain and Sarah Palin pushed in 2008.

And the less said about the State of the Union and the subsequent budget, the better. “Winning the future” has come at the expense of a plan for the present….Something has gone wrong in the Obama administration. And the candidate we need to step forward and point it out isn’t whichever Republican manages to limp shamefacedly out of the primaries after agreeing to call Obama a Kenyan anti-colonialist who kowtows to big business and Karl Marx and believes in both radical Islam and dogmatic atheism. It’s the Barack Obama who ran in 2008. The one who believed in “the fierce urgency of now,” rather than “after the election, we hope.”

Obama has long followed a strategy of letting other people fight pitched battles for a while and then parachuting in toward the end to act as peacemaker. And there’s a case to be made for that sometimes. He did it with healthcare because Bill Clinton tried it the other way in 1993 and got his hide nailed to the wall, and in the end Obama’s strategy worked. Would a more active intervention have worked better? Maybe, but there was a pretty good case to be made for doing it the way he did.

But over the past year this trait has become almost pathological. Maybe the power of the bully pulpit is overrated, but Obama seems unwilling to even try to move public opinion or take a leadership role in his own caucus. At this point, I really have no idea what he thinks of taxes, the deficit, Medicare cuts, or much of anything else on the domestic agenda. I guess he’s figuring that if his political opponents insist on digging themselves into a hole, he might as well stand back and let them. But if he keeps this up much longer, there’s going to be nothing left of his presidency except “Well, I guess he’s better than the wingnuts from the other party.” That may win him reelection, but it won’t do much more.