A few days ago I read that high-frequency trading in stocks had died down recently, apparently because the stock market has been a little too stable lately. “Hmmm,” I thought as I read this. “If they’re 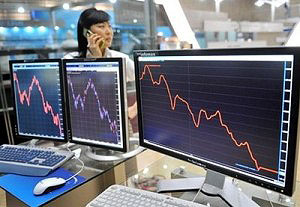 dropping out of equities, I wonder what the supercomputers are up to now?”

The answer, it turns out, is commodities, and Reuters reports that algorithmic trading is likely responsible for a big part of the rout in commodity prices over the last couple of weeks:

In many cases, computer algorithms sold for technical reasons, as oil dropped through levels that, once breached, could trigger ever larger waves of selling yet to come….”Computers don’t care. Momentum just increases until nobody wants to stand in front of it,” said Peter Donovan, a floor trader for Vantage on the New York Mercantile Exchange.

Some big Wall Street traders watched their own systems sell into the down trend but couldn’t know for sure who had initiated the selling spree. They only knew that similar machines at other firms, from New York, to London, Geneva and Sao Paulo, would be automatically selling in much the same manner.

….”We believe the magnitude of the correction appears in large part to have been exacerbated by algorithmic traders unwinding positions,” Credit Suisse analysts wrote in a report. High frequency trading and algorithmic trading accounts for about half of all the volume in oil markets.

A range of factors, both economic and political, were also at play. The recent rise in raw goods has been fueled in part by the U.S. Fed pumping cash into the markets by purchasing $600 billion in bonds. This program has pushed interest rates extraordinarily low, making borrowing essentially free once adjusted for inflation. Investors have been using the super-cheap money to buy into commodity markets. But the Fed’s program is slated to end on June 30.

“Funds were likely to take profits before June when the direct (Fed) bond purchases stop. All were eyeballing each other to see who would take profits first,” said a London-based oil trader.

It would be nice if Wall Street were using the Fed’s cheap money to invest in real-world goods and services. But apparently the real world just isn’t ready for any investment yet, and the private sector has boatloads of cash on its hands anyway. So instead the money gets shoveled into whatever financial markets are the most volatile, since those are the markets that promise the highest short-term rewards. This doesn’t actually benefit anyone other than Wall Street traders, but that’s the world we live in these days.

Via Felix Salmon, who has some additional comments.