One lesson bin Laden learned from the war against the Soviets was the importance of his enemy’s economy. The Soviet Union didn’t just withdraw from Afghanistan in ignominious defeat, but the Soviet empire itself collapsed soon thereafter, in late 1991….He has compared the United States to the Soviet Union on numerous occasions — and these comparisons have been explicitly economic. For example, in October 2004 bin Laden said that just as the Arab fighters and Afghan mujahidin had destroyed Russia economically, al Qaeda was now doing the same to the United States, “continuing this policy in bleeding America to the point of bankruptcy.” Similarly, in a September 2007 video message, bin Laden 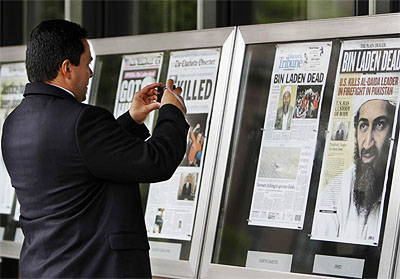 claimed that “thinkers who study events and happenings” were now predicting the American empire’s collapse. He gloated, “The mistakes of Brezhnev are being repeated by Bush.”

I confess that I’ve always been a little skeptical of attempts to take this argument too far. This might well have been a thread in bin Laden’s thinking, but these “explicitly economic” comparisons all seem to have come after 9/11 and seem suspiciously opportunistic to me. Still, there’s obviously something to this, and after totting up the multi-trillion dollar cost of our various responses to al-Qaeda over the past decade, Ezra Klein muses on how successful bin Laden ended up being:

It isn’t quite right to say bin Laden cost us all that money. We decided to spend more than a trillion dollars on homeland security measures to prevent another attack. We decided to invade Iraq as part of a grand, post-9/11 strategy of Middle Eastern transformation. We decided to pass hundreds of billions of dollars in unpaid-for tax cuts and add an unpaid-for prescription drug benefit in Medicare while we were involved in two wars. And now, partially though not entirely because of these actions, we are deep in debt. Bin Laden didn’t — couldn’t — bankrupt us. He could only provoke us into bankrupting ourselves. And he came pretty close.

It’s a smart play against a superpower. We didn’t need to respond to 9/11 by trying to reshape the entire Middle East, but we’re a superpower, and we think on that scale. We didn’t need to respond to failed attempts to smuggle bombs onto airplanes through shoes and shampoo bottles by screening all footwear and banning large shampoo bottles, but we’re a superpower, and our tolerance for risk is extremely low. His greatest achievement was getting our psychology at least somewhat right.

Looking backward from, say, 2030, our response to 9/11 will seem like a pretty small contributor to our fiscal (in)solvency. I’ll peg it at less than 10%. For a handful of terrorists living in a compound in Afghanistan, that’s pretty impressive. But in the grand scheme of things, it’s still a nit. If America really does end up bankrupting itself, bin Laden will have had nothing to do with it. The cause will be a delusional conservative political culture that throws temper tantrums at the thought of properly funding our nation’s most popular social programs. They’d rather bring down the government than raise taxes by a few percent of GDP, and that, not a handful of delusional religious fanatics on the other side of the globe, is the real cause of our problems.