Newt Gingrich’s daughter, Jackie Gingrich Cushman, has decided to “set the record straight” about the story that Newt confronted his then-wife (also named Jackie) about the terms of their divorce while she was in the hospital recovering from surgery in 1980. It’s a very odd piece. Cushman says she’s gong to “correct the record,” but then recounts the bare fact of the hospital visit and provides no details at all of what happened. So what did happen? It was Mother Jones that 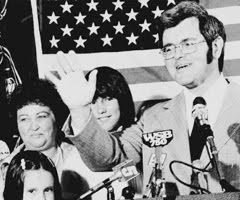 originally broke this story in a profile of Gingrich in 1984, so for the record, here’s what David Osborne wrote about this incident. The story picks up shortly after Gingrich’s first election victory in 1978:

Despite the solid family-man advertising pitch, however, some of Gingrich’s associates could sense what was coming. On election night, several of them took bets on how long his marriage would last….”Jackie was kind of frumpy,” explains Lee Howell, who asked Gingrich to be his best man in 1979 but pulls no punches about his friend’s divorce. “She’s lost a lot of weight now, but she was kind of frumpy in Washington, and she was seven years older than he was. And I guess Newt thought, well, it doesn’t look good for an articulate, young, aggressive, attractive congressman to have a frumpy old wife.”

The winning bet, as it turned out, was 18 months. In April of 1980, the candidate who had promised to “keep his family together” told his wife he was filing for divorce. According to sources in whom Gingrich confided at the time, he was already having an affair with the woman he later married.

When I asked Gingrich about this, he did not deny it. “I’m not going to get into those details or the questions about 1974. I think there is a level of personal life that is personal….I don’t think it’s relevant.”

Private behavior becomes relevant, I suggested, when it contradicts the rhetoric on which a public official has been elected. “Looking back, do you feel your private life and what you’d been saying in public were consistent?”

“No,” Gingrich answered. “In fact I think they were sufficiently inconsistent that at one point in 1979 and 1980, I began to quit saying them in public.”….The divorce turned much of Carrollton against Gingrich. Jackie was well loved by the townspeople, who knew how hard she had worked to get him elected-as she had worked before to put him through college and raise his children. To make matters worse, Jackie had undergone surgery for cancer of the uterus during the 1978 campaign, a fact Gingrich was not loath to use in conversations or speeches that year. After the separation in 1980, she had to be operated on again, to remove another tumor. While she was still in the hospital, according to Howell, “Newt came up there with his yellow legal pad, and he had a list of things on how the divorce was going to be handled. He wanted her to sign it. She was still recovering from surgery, still sort of out of it, and he comes in with a yellow sheet of paper, handwritten, and wants her to sign it.”

Now, I’ve heard this story retailed in different ways since then. Sometimes the story goes that Newt sprung the divorce on his wife in the hospital. Other stories say she was recovering from cancer surgery. Neither is true. As Osborne’s profile makes clear, the divorce was already in progress, and Jackie was recovering from followup surgery two years after her cancer. (The tumor that was removed in 1980 turned out to be benign.) This is pretty gruesome stuff and hardly needs to be sensationalized.

Justin Elliott has more details here, including the fact that Gingrich has long denied that he brought a yellow legal pad to this hospital visit. But that’s about it. His wife was recovering from surgery. The Gingrich daughters were visiting her. Newt did come up and demand that she discuss the divorce. The visit did turn heated. Legal pad or not, nothing in Cushman’s account really changes anything we originally reported.

And by the way: if you’ve never read Osborne’s profile before, you really should now. It was quite famous in 1984 for obvious reasons, and it’s got a ton of fascinating details, including a few that make the hospital story look positively tame. Gingrich is basically a pretty loathsome opportunist, and everyone knew it even back then. Check it out.