Politically speaking, the question of whether finally killing Osama bin Laden is a plus for President Obama depends less on the act itself than it does on the mythologizing that follows. If we get more tick-tocks like this one in the New York Times 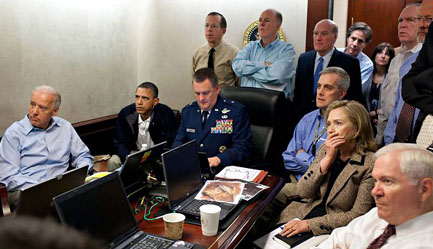 today, it’s safe to say that Obama is going to get a pretty nice bump in the polls:

As more than a dozen White House, intelligence and Pentagon officials described the operation on Monday, the past few weeks were a nerve-racking amalgamation of what-ifs and negative scenarios. “There wasn’t a meeting when someone didn’t mention ‘Black Hawk Down,’ ” a senior administration official said, referring to the disastrous 1993 battle in Somalia in which two American helicopters were shot down and some of their crew killed in action. The failed mission to rescue hostages in Iran in 1980 also loomed large.

Administration officials split over whether to launch the operation, whether to wait and continue monitoring until they were more sure that Bin Laden was really there….[Defense Secretary Robert] Gates was skeptical about a helicopter assault, calling it risky, and instructed military officials to look into aerial bombardment using smart bombs….Last Thursday [] Mr. Obama met again with his top national security officials….Around the table, the group went over and over the negative scenarios. There were long periods of silence, one aide said. And then, finally, Mr. Obama spoke: “I’m not going to tell you what my decision is now — I’m going to go back and think about it some more.” But he added, “I’m going to make a decision soon.”

Sixteen hours later, he had made up his mind. Early the next morning, four top aides were summoned to the White House Diplomatic Room. Before they could brief the president, he cut them off. “It’s a go,” he said. The earliest the operation could take place was Saturday, but officials cautioned that cloud cover in the area meant that Sunday was much more likely.

John Brennan, Obama’s assistant for counterterrorism, called the decision to go after bin Laden’s compound “one of the … gutsiest calls of any president in recent memory.” Brennan works for Obama, so maybe that’s not unexpected. Then again, maybe it really was a gutsy call. The downside was pretty spectacular, after all, ranging from operational failure to bin Laden not being in the compound in the first place. Regardless, if this becomes the conventional wisdom over the next few days, then Obama may come out of this a bigger winner than skeptics like me think.

For more, see the LA Times’ laudatory account, as well as David Corn’s rundown of what it all means: “The episode demonstrates that this president, who is often accused (on the left) of wimping out of political fights and (on the right) of too often wringing his hands, is willing to act decisively and take political chances.” If that’s how official Washington ends up reading this, it’s a very big win for Obama.