Riffing off a Karl Smith post about whether higher taxes destroy the incentive to work (answer: probably not, and the economic literature backs him up), Ezra Klein says:

Republicans argue — and there’s some evidence to back them up — that the rich are more sensitive to tax rates than the middle class or the poor….It’s why they worry much less about extending unemployment benefits than about protecting the rich from tax increases. 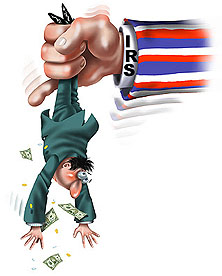 Both policies make people poorer. But future economic growth doesn’t depend on the poor. It depends on the rich.

The problem is that there’s not much evidence backing this view.

I got into an email conversation with a conservative blogger about this last week, and among other things he said that the research on ETI had persuaded him that raising tax rates on the rich was bad for the economy. ETI stands for elasticity of taxable income, and it’s a measure of how much income goes down when tax rates go up. I didn’t pursue the conversation because I’m hardly an expert in the ETI literature, but I thought it was an odd thing to hang his hat on because what little I do know suggests that higher tax rates have very little effect on the economy.

So here’s what I know. Last year I read a review of ETI research written by Emmanuel Saez, Joel Slemrod, and Seth Giertz. I’m not familiar with Giertz, but both Saez and Slemrod are pretty honest guys, so I figured their paper would provide an evenhanded look at what the ETI research indicates. Their conclusions were far from rosy. First, they suggested that the ETI literature of the past two decades varies so widely that it can’t really be considered very reliable yet. Second, they make clear that incomes can decline for several reasons, and most of the reported income drops in the wake of tax increases are related to tax fiddling, not actual economic deterioration. From the paper:

While there are no truly convincing estimates of the long-run elasticity, the best available estimates range from 0.12 to 0.40. At the approximate midpoint of this rate — an ETI of 0.25 — the marginal excess burden per dollar of federal income tax revenue raised of 0.195 for an across-the-board proportional tax increase, and 0.339 for a tax increase focused on the top one percent of income earners.

This all makes sense to me. After all, we’ve already run a sort of destruction test on this. During the 50s, top marginal rates were around 90%, and if high tax rates on the rich harm the economy then the tax rates of the 50s should have literally brought the United States to its knees. But even with heroic efforts, you can’t make the case that those tax rates were anything more than a tiny drag on the economy. And if 90% rates produced only a tiny drag, then the effect of moving from, say, 35% to 40% would be literally too small to measure. Conservatives may claim to believe that they oppose higher tax rates on the rich because they’d be a disaster for the economy, but the evidence suggests something far less: namely that it would be a minor disaster for the rich. The rest of the economy would do just fine.