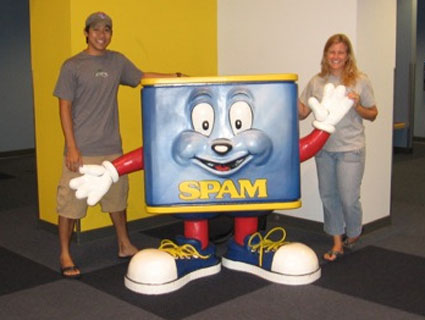 Hormel, the company that makes SPAM, has outsourced the difficult work of pig slaughtering to Quality Pork Processors (QPP), an affilliated company. Since Hormel likes to use every part of the animal, some of the people at QPP have jobs that revolve around turning pig brains into a pink slurry that somewhat resembles a strawberry milkshake in appearance. (Yum!) From reading Ted Genoways’ fascinating, sad story on QPP and Hormel in the latest issue of the magazine, I can tell you the workers do this by inserting a nozzle into the pig skull’s brain cavity and firing away with a burst of compressed air. I’ll let Genoways take it from here:

The line had been set at 900 heads per hour when the brain harvesting first began in 1996—meaning that the rate had increased a full 50 percent over the decade, whereas the number of workers had hardly risen…Second, to match the pace, the company switched from a foot-operated trigger to an automatic system tripped by inserting the nozzle into the brain cavity, but sometimes the blower would misfire and spatter. Complaints about this had led to the installation of the plexiglass shield between the worker manning the brain machine and the rest of the head table. Third, the increased speed had caused pig heads to pile up at the opening in the shield. At some point in late 2006, the jammed skulls, pressed forward by the conveyor belt, had actually cracked the plastic, allowing more [brain slurry] mist to drift over the head table. Pablo Ruiz, the process-control auditor, had attempted to patch the fracture with plastic bags.

As you might imagine, breathing in pig brain slurry mist is probably not great for your health, and some of the workers at the QPP factory developed a mysterious nerve ailment. Most of them, as you can see from this chart, worked near the brain-harvesting operation:

Some of the workers who got sick were undocumented immigrants working with fake papers, because, I assume, “manufacturing pig-brain slurry” is one of those “jobs that Americans don’t want” you always hear about. I don’t want to ruin the ending, but you can probably guess that being an undocumented immigrant is not an advantage when you’re trying to get your employer to compensate you for the health problems you developed while working in the brain-harvesting factory.

Genoways has written a great story chock full of really impressive investigative reporting. You should really read the whole piece. You can also support more of this kind of reporting in Mother Jones by sharing Genoways’ piece on Facebook and Twitter (free), signing up for our emails (free), subscribing (cheap!), or making a tax-deductible donation. Thanks.

Kevin is on vacation this week. Andy Kroll and I are filling in for him.