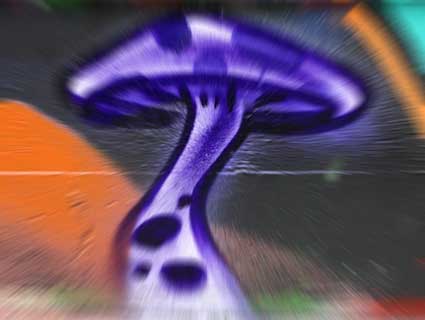 UPDATE: Here’s a follow-up post on whether magic mushrooms can bring you closer to God.

Here’s something a little offbeat for a Friday morning. A team of researchers at the Johns Hopkins School of Medicine has recently documented a safe, long-lasting way of improving both your life and your personal feelings of well-being: shrooms.

Or, more precisely, psilocybin, the active ingredient in magic mushrooms. Here’s the boring news first: ingesting psilocybin produces a mystical experience that can be quantified. “Noetic quality,” for example, increased from 19.4 on a placebo to 70.6 on the highest dose used in the study. “Transcendence of space and time” increased from 18.3 to 78.2. Etc. You probably already knew that.

Here’s the somewhat more interesting news: psilocybin can sometimes produce bad trips full of fear and anxiety, but the researchers have also figured out how to minimize this. Partly this was due to the experimental design: “The study was designed to optimize the potential for positively valued experiences by providing 8 hours of preparation, administering psilocybin in a pleasant, supportive setting, and instructing volunteers to focus explicitly on their subjective or inner experience.” They used soothing music, too. But they also tried various dosages of psilocybin on their subjects, and it turns out that nearly all of the episodes of anxiety happened at the highest dose. Crank it down one notch and you’re still likely to get most of the benefits but with significantly less chance of a bad experience.

But now for the most interesting result: psilocybin produces not only mystical experiences, but joy, happiness, and positive social effects. And it does it for a long time: in followup interviews 14 months after the study was completed, nearly all the subjects still reported positive changes in their lives, especially if they received their psilocybin in increasing dosages. (Half the study volunteers got the highest dose first and worked down, and half started with the lowest does and worked up. All volunteers also got a placebo tossed in at some point.) Here are the geeky charts you’ve been waiting for:

These effects were confirmed by interviews with friends of the volunteers who had been recruited to provide periodic feedback to the research team.

Notably, 61% of volunteers considered the psilocybin experience during either or both the [highest dosage] sessions to have been the single most spiritually significant of their lives, with 83% rating it in their top five. Consistent with this, 94% and 89% of volunteers, respectively, indicated that the experiences on those same sessions increased their well-being or life satisfaction and positively changed their behavior at least moderately.

….One month after sessions at either or both the two highest dose sessions, 94% of volunteers endorsed that the experience increased their sense of well-being or life satisfaction moderately or very much, and 89% rated moderate or higher changes in positive behavior. At the 14-month follow-up, these ratings remained high. The types of behavior change most frequently cited by volunteers were better social relationships with family and others, increased physical and psychological self-care, and increased spiritual practice (Table 6). Ratings by community observers before and after the study as well as ratings by study monitors after the study were consistent with the persisting positive changes in behavior and attitudes claimed by the volunteers.

So there you have it: a genuine mystical experience with long-lasting positive effects, no reported negative effects, no known medical side effects in healthy people, and with virtually no chance of a bad experience. Does that sound like something you’d like to try? Well, you can’t: no matter how safe and beneficial it might be, psilocybin is a Schedule 1 controlled substance and you can’t have any. You may thank the War on Drugs whenever you like.

For a taste of what the volunteers said about their psilocybin experiences, keep reading. A selection of comments from the Hopkins study is below. 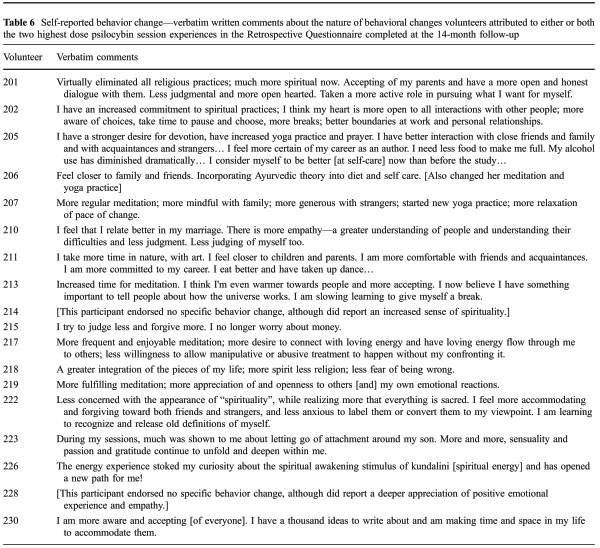