I promised to level with the American people. To look them in the eye. And tell them the truth.

OK, Tim. Hit me with it. I’m ready to be leveled with and told hard truths that I might not like:

I propose just two rates, 10% and 25%…..A one-third cut in the bottom rate….And a 28% cut in the top rate to spur investment and job creation. In addition, we should eliminate all together the capital gains tax, interest income tax, dividends tax and the death tax.

….Once we unleash the creative energy of America’s businesses, families and individuals as we did in the eighties and nineties, a booming job market will reduce demand for government assistance. And rising incomes will increase federal revenues….5% economic growth over 10 years would generate 3.8 trillion dollars in new tax revenues.

So that’s Tim Pawlenty’s hard truth? That if I suck it up and accept lower taxes, federal revenues will magically go up and our deficit problem will already be half solved without anyone having 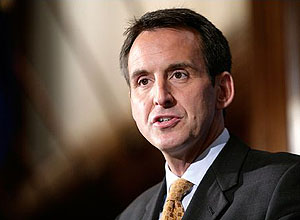 to do anything? That’s some tough talkin’, governor. You’ll probably take a real hit in the polls for this kind of truthtelling.

It’s hard to know what to say about this. The pander quotient in Pawlenty’s speech is just off the charts. It’s less a speech than a series of Reagan-era applause lines bulked up on steroids and then stitched together for public consumption. Reduce taxes on the rich (plus a little bit on the middle class so it’s not too obvious what’s going on). Cut corporate taxes. Pass a balanced budget amendment. Raise the Social Security retirement age. Eliminate the post office, the government printing office, Amtrak, and Fannie and Freddie. Apply “Lean Six Sigma” to generate 20% spending reductions.1 Slash regulations that cost us $1.75 trillion per year. Repeal Dodd-Frank. Repeal healthcare reform. Gut the EPA. Keep the dollar strong. No more “printing money.”

I dunno. It feels like Pawlenty is auditioning for the lead role in a campaign remake of “Heart of Darkness” or something. A couple of miscellaneous comments, though. First, after a few years of skirting dangerously close to reality, I guess it’s once again official Republican dogma that tax cuts pay for themselves and then some. Glad to see they can still kick it old school. Second, it looks like the battle of the GOP “adults” — Romney and Pawlenty — is taking shape. Romney lately seems to be hedging a bit toward non-insanity, hoping that there’s still a majority in the Republican Party that isn’t quite willing to sail completely over the Palin/Beck/Limbaugh cliff into fairyland. Pawlenty, conversely, is going all in. If you believe in faith, freedom, and that old-time supply-side black magic, he’s your man.

1No, I have no idea what this bit of corporate consultant babble means either, and I refuse to Google it to find out.