David Brooks had an op-ed in the New York Times yesterday that proclaimed the near impossibility of restraining costs in health care through centralised government efficiency evaluations, which is being justly ridiculed by people (Jon Chait, Jonathan Cohn, Ezra Klein) who note that every single one of the world’s centralised government-regulated health-care systems is far cheaper than America’s relatively decentralised private-sector one. Mr Brooks has surely had this explained to him a thousand times by now, and his failure to process the fact or incorporate it into his worldview seems to me most likely to reflect an absence of the ideological furniture on which the fact could sit.

My post about Brooks’s op-ed was a little lighter on the ridicule than many, and this might be a good chance to explain why. There are two things to be concerned about in the world of healthcare costs: levels and rates. 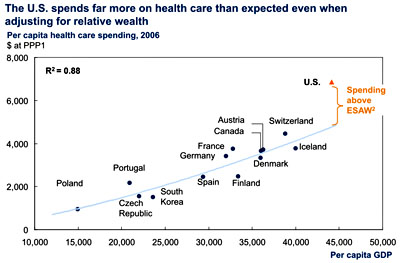 On the former, the evidence is clear: our spending is far higher than any other comparable country’s. Adjusted for wealth (richer countries don’t just spend more on healthcare, they spend a higher percentage of GDP on healthcare), America spends $2,500 more per person than any other country in the world. Aaron Carroll probably has the best single summary of this state of affairs here (or you can just read the conclusion here), and it turns out that we simply spend more on everything. More on doctors, more on insurance, and more on drugs. And we also provide more treatment. We love our diagnostic tests in America.

The fact that other countries do better on this score is almost certainly a testament to centralized planning. France and Japan and England mostly have overall healthcare budgets set by the state, and since those budgets depend on taxpayer dollars, there’s a strong incentive to keep them pretty tight. And they do. As a result, they pay less for 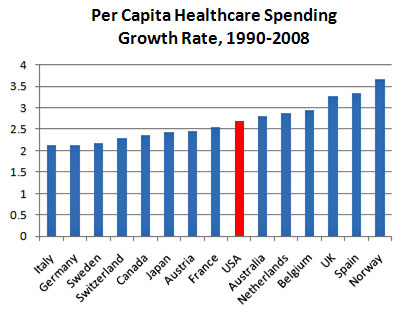 doctors, less for administration, less for drugs, less for everything. Individuals are mostly free to spend more on themselves if they want to, but the state itself has a pretty firm limit on what it will pay.

But that’s only half the story. What about rates of growth? Here’s a chart based on OECD data collected by the Kaiser Foundation, and it shows that spending is increasing everywhere. The U.S. growth rate is high, especially considering that we started from such a high point, but it’s hardly an outlier. The problem of healthcare spending growth isn’t something that centralized systems have been able to solve much better than we have.

So Brooks is wrong to be so dismissive of expert panels and top down budget control. They really do work. At the same time, they aren’t panaceas, and various forms of competition — between hospitals and insurers, between healthcare organizations bidding for Medicare contracts, and between doctors competing for patients — is something worth trying too. You don’t have to drink the tea party Kool-Aid to think that it’s worth keeping an open mind on this stuff.