Why is it that chronic, sky-high unemployment has produced so little political backlash? On Sunday, Catherine Rampell wrote a piece suggesting two big reasons: the unemployed don’t vote in big numbers, so politicians can safely ignore them; and there are fewer institutions left these days to mobilize them the way labor unions used to. Today David Leonhardt adds a third: today’s unemployment affects a relatively smaller number of people than in the past: “joblessness is concentrated among a subset of the population, rather than affecting a larger group of people for shorter periods of time.”

All probably true. But Paul Krugman wrote today that the press plays a role too: “Turn on your TV and you’ll see some self-satisfied pundit declaring that nothing much can be done about 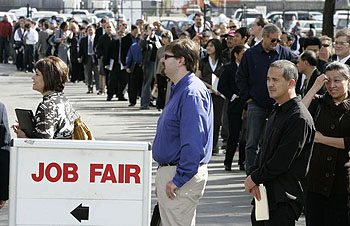 the economy’s short-run problems.” Bob Somerby takes it from there:

As he closes, he again suggests that the “supposedly serious people” you see on TV are too well-off, too self-satisfied, to give a fig—to care.

….Yesterday, in the Sunday Times, three regular columnists published columns. None of the three showed any sign of knowing that their nation’s in trouble, especially so as the deadline for possible default looms….Given the new lay-out of the Sunday Review, quite a few other columns and analysis pieces appeared in yesterday’s section. But no one seemed to have any idea that our nation is in bad trouble.

….There was nothing “wrong” with any of these columns; you may feel that some of them were quite good. But something was grossly wrong with the editor who picked these columns while picking no others. Reading yesterday’s Sunday Review, you would have no idea that anything is wrong with our economy—that millions of people are out of work, that we are facing a possible debt ceiling disaster.

….This has been going on roughly forever. Columnist Krugman to the side, why haven’t career liberal leaders ever complained about this upper-class culture?

Obviously there are lots of differences between the Great Depression and our current economic morass. But one of them was indeed the press: in the 30s, the typical newspaper writer was a modestly paid high school graduate, closer to being a blue-collar worker than a member of the middle class. Big syndicated columnists like Walter Lippman were pretty well off, but they were the exception more than the rule.

Today it’s just the opposite. Punditry is dominated almost exclusively, both in print and on the air, by the rich and the upper middle class. And there’s just no way around it: even if you’re trying hard, it’s close to impossible for someone living a comfortable life to really feel the desolation and helplessness of unemployment and economic distress when they’ve never really experienced it themselves and live in a social circle where it’s rarely a serious problem either.

The long-term unemployed don’t vote much, they aren’t organized, and in electoral numbers there aren’t that many of them. All true. But thanks to a political and media class that’s mostly pretty well off, they’re also largely invisible. Writing about them is more like an anthropological exercise than a simple description of your friends and neighbors. And it’s one reason that we’re doing so little to help them.