Matt Yglesias thinks that offering flood insurance to people who build houses in floodplains is idiotic:

The National Flood Insurance Program [NFIP] offers sub-market insurance rates to people who want to build houses in very flood prone areas. It’d be as if we had a special program to offer subsidized health insurance to people who refuse to wear seatbelts. Sounds nuts? And yet there it is.

Naturally, I was thinking about this over the past few days as Hurricane Irene was powering its way north, and I think the words we choose have an important effect on how we think about this stuff. If you call it “subsidized” flood 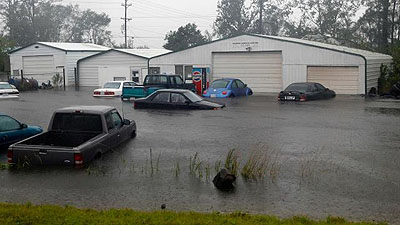 insurance, it sounds like a boondoggle for morons. But what if you simply think of it as a safety net program for rare but unavoidable natural disasters? Then it doesn’t sound so bad.

And that’s probably the right way to think about it. There are a lot of floodplains in America, many of them in places that are economically important. If you think we should depopulate all of them, that’s one thing. But assuming you don’t think that, then there has to be some way to handle widespread flood damage when it occurs. Unfortunately, the private sector won’t do it for the same reason the private sector won’t offer individual health coverage to most people. Don Taylor explains:

Private companies could not compel the purchase of their product absent legislation, so would face tremendous adverse selection problems and/or no one buying their insurance. Into this situation stepped the federal government in 1968, and with a variety of modifications, it has remained the only flood insurance provider in the United States for the past four-plus decades.

NFIP can compel the purchase of insurance. If you live in a designated floodplain, you have an individual mandate to purchase flood insurance. And most of it isn’t subsidized. Taylor again: “Around 80% of covered properties are assessed full-risk premiums based on Army Corps of Engineers models; the other 20% have subsidized premiums because the covered dwelling was built prior to the identification of SFHAs in 1974.”

This doesn’t eliminate the question of whether federal flood insurance is a good idea, whether any of it should be subsidized, or whether the public/private nature of NFIP is a good idea. But it does suggest that NFIP isn’t flatly nuts. There are millions of dwellings currently insured for flood damage in over 20,000 towns and cities. There’s just no way to take a wrecker to all those houses and raze all those towns. That means insurance has to be available to them, and the only entity capable of spreading the risk widely enough to make flood insurance efficient is the federal government. Thus NFIP.