Lack of jobs is why everyone feels bad, not because they have less or are poorer or the country isn’t producing or consuming as much. And, not to get too meta — in what I hope is an easily readable post — but an economy that makes lots of people feel bad is by definition a bad economy.

Moreover, the feeling that you have now about the economy is not the feeling of lack of value creation. It’s not the feeling of socialism….[In a socialist economy] it’s not that you are afraid of losing what you have or that budget constraints are pinching. It’s that the stuff which is available to you sucks. It — in extreme cases — is a world where everyone has a job but where no grocery store has fresh milk. It’s a world where everyone gets a pay check but no one can find shoes that fit.

….The Great Recession: that’s a problem with jobs, with labor. And, it’s very different in kind. When we think about what’s going 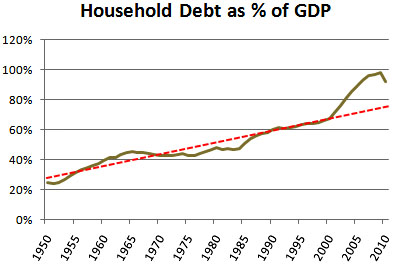 wrong here and how to fix it, we have to keep that squarely in mind.

All true. But I’d point out one other thing that’s worse than it was in the ’90s: household debt. The chart on the right shows total household debt as a percentage of GDP, and as you can see, it’s come down a bit since its peak in 2008. Still, it needs to drop by about a sixth just to get back to its long-term trend line, and it needs to drop by a full third to get back to the same absolute level as 1995. Even with interest rates low, that kind of debt overhang makes people feel very bad indeed, and puts a serious crimp in their ability to buy goods and services.

Still, point taken. There’s not that much intrinsically wrong with the fundamentals of our economy. In the immediate term, we don’t have big worries about inflation or government debt or technological stagnation. We need to deleverage, and once we do that people will start to spend again. Regardless of our longer-term prospects, we should be addressing this much more vigorously—and in the meantime, our focus should be on monetary and fiscal stimulus focused on getting people back to work. It’s criminal that we aren’t doing it.