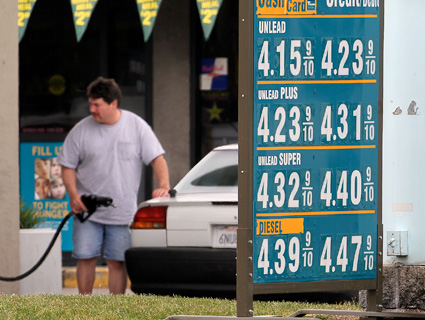 I’ve talked a few times (first here, most recently here) about the possibility that world growth is now constrained by oil production. The basic story is simple: As long as there’s spare oil-production capacity, increasing demand caused by economic growth produces only a steady, manageable increase in oil prices. But oil production is now close to its maximum and can’t be easily or quickly expanded. When the global economy grows enough that demand starts to bump up against this ceiling, oil prices don’t rise slowly and steadily; rather, they spike suddenly, causing a recession, which in turn reduces oil demand and drives down prices. When the economy recovers, the cycle starts all over. Because of this dynamic, the production ceiling for oil produces a corresponding ceiling for world economic growth.

Stuart Staniford puts some numbers to this for our most recent recession. What would it have taken for growth to continue at its 2000-08 rate over the past few years?

…2009 oil production was around 85 [million barrels per day] (depending on what source you like) so in the counterfactual world we would have needed it to be around 88-89mbd. Now, in 2008, oil production got up to around 86mbd (on an average basis) but doing so triggered (or required) an 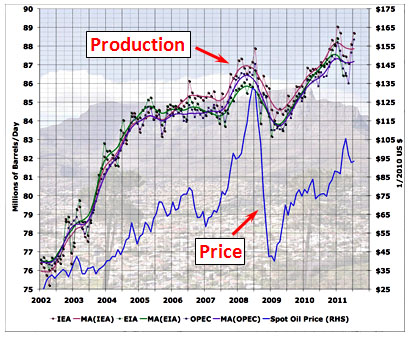 oil shock in which prices briefly reached $135/barrel on a monthly basis and almost $150 on a daily basis. What would the likely price path have been had the world then needed an additional 2-3mbd the following year?

To give an indication of the scale of 2-3mbd, note that the loss of 1.6mbd of oil this year (Libya) triggered something like a $30 increase in the price of oil (before it became clear that the global economy was slowing again causing prices to fall). That, along with other commodity price increases, was enough to cause a little bump in inflation that significantly reduced the Federal Reserve’s latitude for action.

OPEC countries routinely claim that they can increase pumping capacity to meet world demand. “Our customers aren’t asking for more supplies,” is the usual phrasing. But that’s not true. The world plainly wants more oil that OPEC can’t provide. After all, if OPEC had plentiful supplies, we wouldn’t see huge price spikes whenever demand gets near the neighborhood of 90 mbd. But we do.

Now, there are some caveats here. For one thing, no one can say for sure precisely what OPEC’s pumping capacity is (Middle East regimes are very secretive on this score), and Iraq, in particular, can certainly increase its production capacity if it ever gets its infrastructure rebuilt. But in a way, that’s small beer. Global production capacity right now seems to be a little under 90 mbd, and even if this increases to 95 mbd or 100 mbd a few years down the road, we’re going to be continually bumping up against this ceiling along the way as the global economy grows. That’s going to cause sporadic but frequent price spikes.

The effect this has on the economy is probably greater than even most pessimists realize. James Hamilton, a University of California-San Diego economics professor who’s studied the economics of oil demand deeply, points out that 10 of the 11 recessions in the United States since World War II have been preceded by an increase in oil prices—and even small increases in oil prices can have a surprisingly big impact on economic growth. In a recent update of a model he originally published in 2003, he estimates that an oil price spike of 10 percent over its previous high produces a GDP decline of 1.4 percentage points one year later. To put this into real-world terms, his model suggests that the huge run-up in oil prices between 2007 and 2008, when prices nearly doubled, explains most of the Great Recession that followed. And he forecasts that the Libyan price spike early this year, which came on top of a 9 percent increase the previous quarter, will reduce GDP by an estimated 2.4 percentage points by the end of 2011. And the Libyan price spike was pretty modest.

The precise effect of oil prices on the economy depends on which model you prefer, and Hamilton says that a different model that uses a three-year window might be more accurate. That would be good news for the economy in 2011 (and 2012), but it doesn’t matter much for the long run. Basically, we’re stuck with two stubborn observations. First, world demand for oil is very near its production ceiling, which means that even small increases in demand (or small disruptions in supply) now result in large oil price spikes. And increases in demand are inevitable every time the economy starts growing even modestly. Second, even small increases in the price of oil cause large GDP losses. Price spikes of 20 to 30 percent are likely to be common in the future as we periodically bump up against production ceilings, and if Hamilton’s model is correct, this will produce subsequent declines in GDP of 3 to 5 percentage points. That’s huge. The effect on world GDP may be less pronounced, but it will still be significant.

If this model is accurate—and if the ceiling on global oil production really is around 90 mbd and can be expanded only slowly—it means that every time the global economy starts to reach even moderate growth rates, demand for oil will quickly bump up against supply constraints, prices will spike, and we’ll be thrown back into recession. Rinse and repeat.

If you don’t believe in global warming, that’s one thing. But the evidence that the world is starting to reach growth constraints based on oil production is, if not a slam dunk case, still pretty compelling. So even if, as Rick Perry says, the world’s climate scientists are just inventing global warming as a devious scheme to increase their funding, we still ought to be going balls to the wall to expand existing forms of alternative energy and fund research into new ones. Unless, of course, you really like the prospect of a future full of relentless and painful oil-induced recessions. It doesn’t seem very agreeable to me.