Starbucks CEO Howard Schultz has gotten a lot of press for his campaign to get CEOs to halt all political contributions until politicians in Washington, DC, stop their insane bickering. Except it’s not really bickering that he and his fellow corporate titans are upset about:

More than 100 business leaders have signed onto Starbucks CEO Howard Schultz’s pledge to stop making donations to incumbents until Washington gridlock eases, sending a message to lawmakers that they must make real progress in reining in deficit spending.

…In all, more than 100 business leaders have agreed to the pledge, which not only has leaders agreeing to stop campaign contributions until 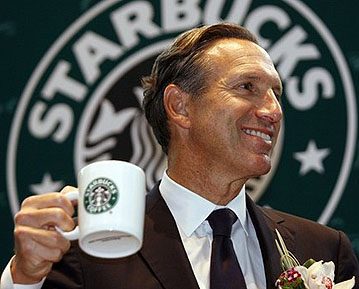 lawmakers “strike a bipartisan, balanced long-term debt deal that addresses both entitlements and revenues,” but also has the leaders agree to find ways to accelerate job growth in their companies and the economy as a whole.

I’m not sure that spending their personal fortunes on mansion upgrades instead of political contributions is quite the cri de coeur these guys seem to think it is, but whatever. As a PR device—and what is politics besides PR?—it seems to be getting some attention. So more power to them.

As usual, though, I’m sort of flummoxed by the substantive thinking on display here. I mean, I assume these guys are all bright and politically aware. Which means they must know perfectly well that one party in Washington is already willing, however grudgingly, to cut a debt deal that addresses both entitlements and revenues. In fact, the leader of this party has spent the last several months leading his own PR campaign to sell precisely this “balanced approach.”

And then there’s the other political party in Washington. This one relentlessly mocks the “balanced approach” as yet another big government giveaway. Its presidential candidates unanimously agree that they’d oppose a deal that includes $10 in real spending cuts for every $1 in increased revenue. Its leader in the House walked away from several opportunities to strike an ambitious deal based on an 85-15 split of cuts vs. revenue increases. Its leader in the Senate declared himself delighted with the debt ceiling debacle, saying his party learned it’s “a hostage that’s worth ransoming.” And the rest of its congressional leaders have all sworn blood oaths not to compromise on their pledge to never ever raise taxes under any circumstances.

This description of recent events isn’t really controversial or especially inflected by partisan hackery on my part. Everyone knows this is how the deal went down earlier this month. Republicans are pretty proud of it, in fact. So in exactly what way are Schultz and his fellow boycotters seeking a “bipartisan” agreement? They aren’t. What they really want, if their own words are to be taken seriously, is for the Republican Party to agree to tax hikes as part of any future debt deal.

And for some reason they’ve decided that Republicans will cave in on this if they announce their intention to withhold all political contributions to both parties this year. Seriously? My guess is that the GOP leadership is laughing its ass off over this. If this kind of strategic thinking is typical of these rock-jawed titans of American industry, it’s no wonder our country is in such trouble.