The Financial Times, speaking ex cathedra, says that the outlines of a stimulus deal are plain: “Cut the payroll tax, extend jobless benefits and subsidise new jobs; then curb entitlement spending by raising the retirement age.” Matt Yglesias is unimpressed:

In my view, raising the retirement age is basically the worst possible form that credible longer-term fiscal restraint could take. The way this works is that if you’re rich, the benefit cut in dollars and cents terms is very small since your life expectancy at 65 is already high. But if you’re poor, the benefit cut is much more severe. Except in real psychological terms it’s even more regressive than that, since poor people are more likely to have jobs that are physically taxing and generally unpleasant. So it sounds like a stinker of a deal to me.

I’m perpetually amazed by the parade of pundits and talking heads who continue to insist that the first and best way of attacking entitlement spending is to raise the retirement age. In fact, as Matt says, it’s probably the worst possible way of doing it: not only 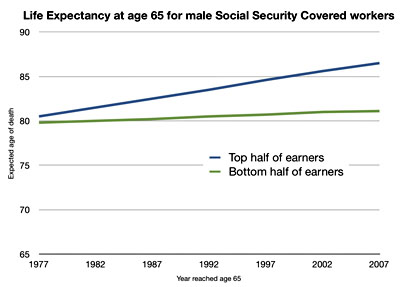 does it produce pretty modest savings, but it’s savagely unfair to the poor and the working class. As the chart on the right shows, the life expectancy of upper income earners has gone up a lot over the past few decades, so even if you increase their retirement age they still have a lot more retirement years than they used to. But low earners? Their life expectancy has barely gone up at all. If you raise their retirement age, it entirely wipes out the tiny gains they’ve made. The bottom line is that high earners get longer retirements while poor people just tread water.

And it’s even worse than that. Not only do high earners get long retirements, but they’ve mostly spent their lives working in cushy jobs that don’t wreck their bodies and are often fairly interesting. An extra couple of years of work isn’t that big a deal for them. But for truck drivers and coal miners and nursing home workers? That’s hard work that’s hard on their bodies, and it’s absolutely no fun. An extra couple of years of that is something to shudder at.

So why does this zombie idea continually resurface with such clocklike predictability? Two reasons, I’d guess. First, it’s a perfect sound bite. “Raise the retirement age” is a whole lot easier to understand than “Change the AIME bend points, reduce the top two PIA factors, and raise the taxable maximum to cover 90% of earnings.” So that’s what we get.

Second, all the loudest voices come from highly educated, white-collar folks who write and talk for a living. They belong to, and speak for, a class that has interesting jobs that don’t tax their bodies, probably aren’t planning to retire at 65 anyway, and in any case, get paid well enough that they can retire early on their investments if they want to, regardless of Uncle Sam’s official retirement age. So it just slips their mind that a higher retirement age would be a way bigger deal to other people than it is to them. Basically, they need to get out more.

Raising the retirement age is an idea that really needs to be buried once and for all. Social Security’s retirement age is already scheduled to rise to 67, and for medical care, age 65 is old enough already. There are plenty of other ways of tackling entitlements, ways that are both fairer and more effective. Anybody who really cares about this stuff needs to understand that.