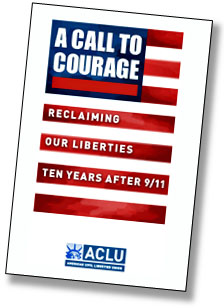 Glenn Greenwald calls our attention to the ACLU’s ten-year commemoration of 9/11. It’s a little different from most of the others hitting the news stands this week. No pictures of the twin towers falling, no touching paeans about how we all came together as a nation for a brief shining moment, no photo spreads of exhausted firefighters or grieving relatives. In fact, no pictures at all. It’s just plain, sober text about what’s happened to our civil liberties over the past decade. Here are a few excerpts:

Torture: Just as the public debate over the legality, morality, and efficacy of torture was warped by fabrication and evasion, so, too, were the legal and political debates about the consequences of the Bush administration’s lawbreaking. Apart from the token prosecutions of Abu Ghraib’s “bad apples,” virtually every individual with any involvement in the torture program was able to deflect responsibility elsewhere. The military and intelligence officials who carried out the torture were simply following orders; the high government officials who authorized the torture were relying on the advice of lawyers; the lawyers were “only lawyers,” not policymakers. This had been the aim of the conspiracy: to create an impenetrable circle of impunity, with everyone culpable but no one accountable.

Indefinite detainment: President Obama’s pledge to close Guantanamo was undermined by his own May 2009 announcement of a policy enshrining at Guantanamo the principle of indefinite military detention without charge or trial….The real danger of the Guantanamo indefinite detention principle is that its underlying rationale has no definable limits.

Targeted assassinations: No national security policy raises a graver threat to human rights and the international rule of law than targeted killing….Under the targeted killing program begun by the Bush administration and vastly expanded by the Obama administration, the government now compiles secret “kill lists” of its targets, and at least some of those targets remain on those lists for months at a time.

Surveillance: The Obama administration, like the Bush administration before it, has used excessive secrecy to hide possibly unconstitutional surveillance….Hobbled by executive claims of secrecy, Senators Ron Wyden and Mark Udall have nevertheless warned their colleagues that the government is operating under a “reinterpretation” of the Patriot Act that is so broad that the public will be stunned and angered by its scope, and that the executive branch is engaging in dragnet surveillance in which “innocent Americans are getting swept up.”

Profiling: No area of American Muslim civil society was left untouched by discriminatory and illegitimate government action during the Bush years….To an alarming extent, the Obama administration has continued to embrace profiling as official government policy….There are increasing reports that the FBI is using Attorney General Ashcroft’s loosened profiling standards, together with broader authority to use paid informants, to conduct surveillance of American Muslims in case they might engage in wrongdoing.

Data mining: Nothing exemplifies the risks our national surveillance society poses to our privacy rights better than government “data mining.”….The range and number of these programs is breathtaking and their names Orwellian. Programs such as eGuardian, “Eagle Eyes,” “Patriot Reports,” and “See Something, Say Something” are now run by agencies including the Director of National Intelligence, the FBI, the Department of Defense, and the Department of Homeland Security….Without effective oversight, security agencies are now also engaged in a “land grab,” rushing into the legal vacuum to expand their monitoring powers far beyond anything seen in our history. Each of the over 300 million cell phones in the United States, for example, reveals its lcation to the mobile network carrier with ever-increasing accuracy, whenever it is turned on, and the Justice Department is aggressively using cell phones to monitor people’s location, claiming that it does not need a warrant.

But hey, it’s just the ACLU. So serious! And such party poopers too. Anyway, aren’t they the guys who hate America? I’m pretty sure they are. There’s really no need to pay attention to all their tedious whining. Please carry on.

UPDATE: A few moments after I wrote this, I turned on the TV and found myself watching Time managing editor Richard Stengel intone the banal conventional wisdom that the lesson of 9/11 ten years later is that “we’ve recovered, we’ve moved on.”

God no. Just no. I don’t care how many people say this, or how many times they repeat it. It isn’t true. Just yesterday we declared ourselves thrilled by the news that maybe someday in the future we’ll be able to board a plane without first taking off our shoes. Thrilled! Listen to the ACLU. We haven’t even come close to moving on.