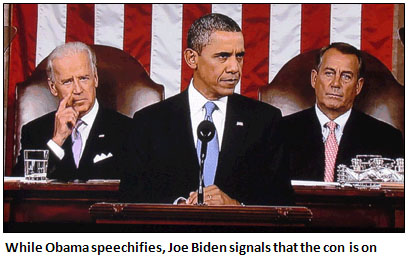 Well, that was sort of an interesting speech. Substantively and rhetorically, it was practically the paradigm of Obama’s “most reasonable man in the room” strategy. Over and over, he offered up proposals that Republicans had supported in the past and that appealed to conservative sensibilities. More than half of it is tax cuts. He was so careful not to suggest anything with even a hint of Democratic parentage that it was almost painful to watch.

But the tone of the speech was much more aggressive than usual. Not aggressive enough, maybe, but then, a joint session of Congress isn’t really the place for a stormy partisan stemwinder. By the usual standards of these things, he showed a lot of fire and he poked Republicans pretty hard.

“You should pass this right away.” That’s Obama’s new tagline. And sure, Congress should pass it right away. But I have to confess that I still don’t see the legislative road to passage here. The incentive for Republicans to obstruct everything that comes from the White House remains the same as it’s ever been, and it remains as strong as it’s ever been. Helping the economy helps Obama’s reelection, and that’s no good for Republicans. And making sure that everyone in America hates “Washington” is good for Republicans. As Marc Ambinder puts it:

Getting things done—anything—means that government is doing something. And that’s bad. So the worst thing that can happen is for anything associated with the president to pass cleanly, or even at all. If you’re a Republican member of Congress, there is no real incentive to compromise.

The GOP has created a political feedback loop that is calculated to destroy President Obama’s credibility as a change agent. They’ve figured out that when government is gridlocked and sclerotic, even silly and absurd, no one in Washington comes out smelling like a rose. No one seems reasonable, because nothing gets done. The reasonable man just looks weak.

Yep. That was true yesterday and it’s true today, no matter how conciliatory John Boehner pretends to be for public consumption. So: nice speech. Good to see some fire in the belly. But I think the prognosis for action remains dim.

UPDATE: Several people have pointed out to me that I should be judging this speech not based on whether any of Obama’s proposals will be enacted, but based on how it helps him politically. The general idea seems to be that Obama has been so incredibly reasonable that he’ll be in a good position to make Republicans look bad when they refuse to pass any of his proposals.

Sure. Maybe. But I’m pretty skeptical even on that score. My guess is that the speech will quickly be forgotten, Congress will return to its usual squabbling, and Obama’s reasonableness will shortly be buried beneath the usual howling from the Drudge/Fox/Limbaugh axis about how wildly radical his plan his. Reporters will press the Republican leadership for a while about why they aren’t supporting proposals that are so basically conservative, but they’ll get bored with this before long and give it up.

Just to hedge my bets, though, I wouldn’t be surprised if Republicans do pass one or two of Obama’s proposals. As long as they don’t pass the whole thing, then (a) they can take credit for passing the good parts and cutting out the pork, (b) they’ll seem reasonable in the process, and (c) it won’t add up to a big enough stimulus to help the economy (and Obama’s reelection) much anyway. That would actually be a pretty winning strategy for them.