Rick Perry thinks Supreme Court justices should serve 18-year terms instead of having lifetime appointments. Jon Chait says this is a rare example of a smart Perry policy:

The current system of lifetime tenure creates real problems. Huge policy swings hinge on the simple health and longevity of Supreme Court justices. This results in very old justices clinging to their seats until a sufficiently friendly president can take office. It also gives presidents an incentive to nominate the youngest possible justice who can be confirmed, as opposed 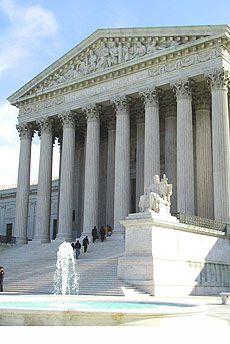 to the most qualified possible justice. And eliminating some element of the sheer randomness by which each party gets to appoint justices would tend to reduce the chances of the court swinging too far one way or another from the mainstream of legal thought.

It’s hard to imagine the incentive structure for any president to propose such a reform — why volunteer to the the first president whose judicial nominees don’t get lifetime tenure? But it is slightly reassuring to see glimmers of sense in Perry’s platform.

Why be the first president to volunteer for this? That would depend on how it was implemented. It would require a constitutional amendment, and I imagine a constitutional amendment could affect sitting justices. So a president might agree to this as long as the amendment limited the terms not just of new justices, but also of sitting justices, starting with the longest-serving ones. That could end up working out fairly favorably.

More to the point, though, the president wouldn’t get a chance to volunteer in the first place. Presidents have no role in the constitutional amendment process. Still, the same logic applies to the president’s party in Congress, so that’s a nit. So who knows? Maybe it could be done with the proper amount of fiddling around the edges.

But this brings up another question: why is Perry in favor of this? Is it just part of the general movement conservative outrage over “activist judges”? Perry seems to believe that term limits would “restrict the unlimited power of the courts to rule over us with no accountability,” but I don’t really see that. It’s equally hard to see how you’d conclude that this would be institutionally favorable toward either liberals or conservatives unless you’re really, really sure that your side is going to control the White House more often than the other.

Meh. It’s probably a mug’s game to try and dig too deep into Perry’s mind here. My guess is that “judges bad, term limits good” is about as far as he’s considered things. Still, for the usual goo goo liberal reasons that Chait lists, I’d support him on this. Let’s hear it for term limits on Supreme Court justices.