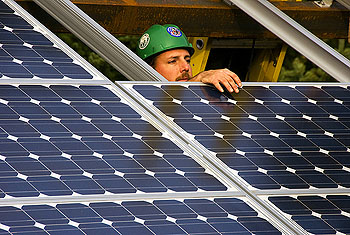 Dave Roberts writes today about a federal program that has no net cost, supports the fastest growing industry in the country, leverages private capital at more than 4:1, and supports tens of thousands of new jobs:

So you’d think this would be a home run, right? At a time when jobs are at the top of every politician’s mind, surely a bit of low-cost economic stimulus that doesn’t increase the deficit and leverages tons of private capital and creates tens of thousands of jobs can serve as the rare locus of bipartisan cooperation. Right?

Except the industry in question is the solar industry. And because this industry involves clean energy rather than, I dunno, tractor parts, it has been sucked into conservatives’ endless culture war. Rather than lining up to support the recession’s rare economic success story, Republicans are trying to use the failure of a single company — Solyndra — as a wedge to crush support for the whole industry.

….This. Is. Insane. Right in front of our noses is what everyone says they want: a growing industry, creating jobs, leveraging economic stimulus into enormous private-sector investment. And Republicans are going to let it die! And Democrats are going to let them!

Even after following this stuff pretty closely for the past decade, it never fails to gobsmack me the way conservatives turn everything into a culture war issue. Because Dave is right: solar power is a great industry on pretty much any metric. It’s growing, it’s clean, and it provides lots of good jobs. At a minimum, it’s as good as any other industry, and repurposing solar tax credits into solar cash grants in order to help a broader array of small businesses is sort of a no-brainer.

But Republicans are against it. Why? The logic seems to be (a) global warming is a myth, (b) therefore anything associated with global warming is bad, (c) solar power is associated with fighting global warming, so (d) solar power is bad. Or something like that. I certainly can’t think of any other reason why Republicans are so unanimously in love with subsidies for nuclear and coal and so passionately opposed to renewable energy in nearly every form. It’s as if supporting renewables is an implicit admission that clean energy is a good thing, which in turn is an implicit admission that global warming is real. And since that’s a left-wing hippie thing to believe in, they can’t support renewables.