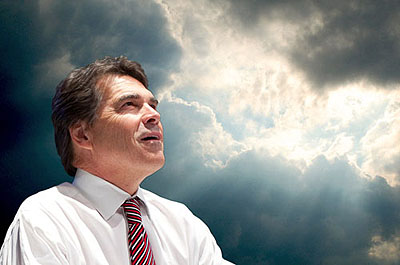 The plan starts with giving Americans a choice between a new, flat tax rate of 20% or their current income tax rate. The new flat tax preserves mortgage interest, charitable and state and local tax exemptions for families earning less than $500,000 annually, and it increases the standard deduction to $12,500 for individuals and dependents….My plan also abolishes the death tax once and for all, providing needed certainty to American family farms and small businesses….To help older Americans, we will eliminate the tax on Social Security benefits….We will eliminate the tax on qualified dividends and long-term capital gains to free up the billions of dollars Americans are sitting on to avoid taxes on the gain.

In addition, Perry is going to lower the corporate tax rate, move to a territorial tax system, pass a Balanced Budget Amendment, ban earmarks, freeze federal hiring and salaries through 2020, halt all pending federal regulations, repeal Obamacare and Dodd-Frank, repeal section 404 of Sarbanes-Oxley, and add private accounts to Social Security (presumably without paying for them, per normal Republican doctrine)

I’m disappointed. Perry only wants to repeal section 404 of Sarbanes-Oxley? Why not the whole enchilada? What a sellout.

What can you even say about this? It sounds less like a tax plan than a big ol’ stew pot of right-wing applause lines, all the way up to the inane insistence that eliminating the estate tax has nothing to do with rich people and is only designed to provide “needed certainty to American family farms and small businesses.” Should we laugh or cry? Perry has actually managed to combine two separate conservative memes (the estate tax is all about family farms, uncertainty is hobbling the economy) into one single sentence that makes even less sense than either of them separately. It’s hard not to be impressed.

But can we please spare a moment for the people who are really going to suffer because of this? Yes, I’m talking about whichever poor schlubs at the Tax Policy Center draw the short straw and have to go through the dreary motions of scoring this. We all know the basic answer, of course: Perry’s plan represents a massive tax cut for the rich and a huge loss of revenue for the federal government. But we want numbers, dammit! Not that they really matter, since once they’re produced we’ll merely be told that they represent old-fashioned static thinking. What we need is a shiny new dynamic scoring of Perry’s plan that takes into account the fact that it would, as James Pethokoukis puts it, “supercharge growth.” I assume he tweeted that with a straight face, but on the internet you never know, do you?

And one last thing: you sort of have to admire Perry’s gimmick of allowing everyone to choose between his plan and the existing income tax. You can almost imagine the conversation: one of his advisors points out that no matter how careful you are, someone will pay more under the new plan. Probably people with low incomes, and you just know the librul media will have a field day with that. “It’s regressive! Rick Perry hates the poor!” It’ll be a nightmare.

But Perry has a brainstorm! Give everyone a choice! This means that not one single person will pay more under his plan, because they can always choose the old system if they want. This means keeping all 60,000 pages (or whatever) of the old tax code, of course, so nothing really gets simplified. Still, no one pays more, and that’s a guarantee. Beat that, Herman Cain.