Reihan Salam directs us to an essay about labor unions by Alan Haus, an IP and employment law attorney in San Francisco. Haus thinks that conservatives ought to be more supportive of the power of labor unions in promoting higher wages:

There is much that could be said about the economic effects of promoting higher wages. For Republicans, the disadvantages should be trumped not only by the advantages but also by a vital consideration of political philosophy: the society of limited government to which most Republicans aspire will only come about in the real world if most Americans earn enough money to save for retirements and college educations, 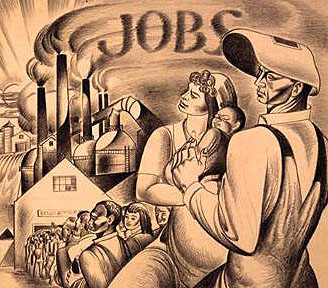 and provide for their long-term healthcare through substantially private markets. Achieving this requires some measure of support for a high wage economy.

But Haus is a lot less enthralled with every other aspect of organized labor:

….The central problem with private sector unions is that under current labor relations regimes they stifle economic innovation….[This] starts with the litany of subjects on which collective bargaining is not only permitted, but in many cases mandatory. The only mandatory subject of bargaining in the 21st century should be employee compensation.

Radically different employee associations that don’t suffocate both their companies and their members need to be created….Congress should authorize employee associations that are easier to form than current unions, but which do not have the power to interfere with managerial prerogatives (which is pretty much every subject other than employee compensation as determined by a collectively bargained contract).

The idea here, I guess, is that there would be two distinct kinds of labor unions authorized and protected by law. The first kind would be the ones we have now, which are extremely difficult to create. The second kind would be restricted to bargaining over wages and benefits, but would be much easier to create. With this kind of “Union Lite” available as an option, perhaps Wal-Mart could finally be successfully organized?

I’m surprisingly sympathetic to this notion, though it’s obviously pie in the sky. As Haus mentions elsewhere, existing labor unions would oppose it and therefore Democrats would oppose it too. Likewise, although perhaps corporations and rich people should be in favor of organizations that promote higher wages for the working and middle classes, they aren’t. Therefore Republicans would also oppose this idea.

Beyond this, there are obvious problems with wage-only unions. I’ve long supported organized labor because it’s the only large-scale countervailing power that promotes the economic interests of the middle class against the interests of the corporate community. At the same time, I’ve long recognized that telephone-book size contracts stuffed with endless picayune work rules are genuinely corrosive. But where do you draw the line? I agree that unions would be far more acceptable to management, and far more useful to their members, if they spent less time fighting for rigid job classifications and money-wasting featherbedding clauses. But what about safety regs? I’d love to think that we could just trust MSHA to enforce safe practices in coal mines, but that would be naive. It’s the UMW that’s been mostly responsible for progress on that front.

Still, this is an interesting suggestion. Whatever you think of them, unions in their existing form are dying, and there’s little reason to think that’s going to change. I acknowledged this when I wrote about unions earlier this year (“Why Screwing Unions Screws the Entire Middle Class”) and argued that we needed something to replace them, “a countervailing power as big, crude, and uncompromising as organized labor used to be.” Haus’s proposal won’t be adopted anytime soon, but at least it’s a useful idea: a new union movement that trades a bit of power in one area (work rules) for more power in another (much greater density in the private sector). It’s something to think about.