The New York Times has a preview today of a new report showing that a declining number of people live in middle-income neighborhoods. Partly this is because the ranks of the middle class have declined, but it’s also because of self-sorting:

The study also found that there is more residential sorting by income, with the rich flocking together in new exurbs and gentrifying pockets where lower- and middle-income families cannot afford to live.

Andrew Sprung relates this to his wife’s suburban neighborhood when she was growing up in the ’60s:

Mr. Grimm was a bricklayer. Mr. Wojick was a foreman at the Ford plant. Mr. Majewski worked in a bronze casting factory, as did one other neighbor. Mr. Cobb worked in product safety at Fisher-Price. Mr. Frank was a stockbroker. Tombari sold insurance. Panetta was a meat wholesaler. White was a concrete contractor working mainly on bridges. Carlotti was a dentist (and my father-in-law, an oral surgeon). The Murphys, husband and wife, were teachers, and so 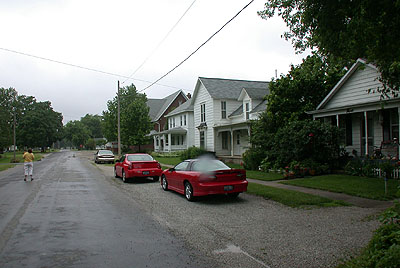 were the Stones. Burger was a roofer…[Today,] there are fewer factory workers, natch. And I suspect that the dentists and stockbrokers probably live elsewhere.

You don’t see that kind of thing as much anymore. Today the middle- and working-class folks have stayed or perhaps moved down, while the dentists and stockbrokers and professors and engineers all live together in upper-middle-class neighborhoods with great schools and great services. And this self-segregation works in other ways too. I remember reading once that if you have a college degree, the odds are that virtually all your friends do too. So I tested that once. At a party with about 20 of our friends, I mentally went around the room and ticked off each person. Sure enough, all but one of them had a college degree, and about a third had advanced degrees of one kind or another. Given all this, it’s hardly surprising that the report finds that 65 percent of families lived in middle-income neighborhoods in 1970 and today only 44 percent do:

Sean F. Reardon, an author of the study and a sociologist at Stanford, argued that the shifts had far-reaching implications for the next generation. Children in mostly poor neighborhoods tend to have less access to high-quality schools, child care and preschool, as well as to support networks or educated and economically stable neighbors who might serve as role models.

The isolation of the prosperous, he said, means less interaction with people from other income groups and a greater risk to their support for policies and investments that benefit the broader public—like schools, parks and public transportation systems. About 14 percent of families lived in affluent neighborhoods in 2007, up from 7 percent in 1970, the study found.

This isn’t a new observation. We’ve been fretting for a long time about the rise of gated communities, the abandonment of public schools by prosperous city residents, and the booming market in McMansions. And more and more, this kind of segregation doesn’t apply only to the truly rich. Increasingly, even the merely well off hardly have any social interaction outside their own class: They live in different neighborhoods, eat in different restaurants, send their kids to different schools and different sports leagues, and vacation in different places. As this gets worse, it’s reflected in the increased insistence of the rich and the upper middle class that their taxes are far too burdensome and, in any case, are just wasted anyway. And that’s true, if a big part of your tax dollars is going to middle- and low-income workers who all live elsewhere and barely even seem like real people. It’s a toxic trend, and it’s one that’s increasingly reflected not just in our social lives, but in our economic lives and our political lives too. It’s not clear what, if anything, can slow it down.