We all know that Republicans have done their best to hamstring President Obama’s ability to get anything done via routine filibuster. That’s old news. We also know that they’ve slow-walked his executive appointments for the same reason. That’s also old news. We even know that they’ve tried to prevent the new Bureau of Consumer Protection from functioning at all by refusing to confirm a director — any director. That’s yet more old news. 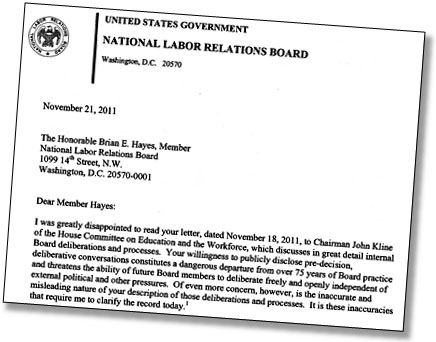 So what’s next? Today Harold Meyerson passes along their latest brainstorm: they’re going to prevent the NLRB, an existing body that already has existing board members, from operating by the simple expedient of refusing to show up for meetings. No quorum, no votes:

In a letter made public yesterday, Republican Brian Hayes wrote fellow GOP-er John Kline, chairman of the House Education and Workforce Committee, that he might well not participate in the Board’s scheduled November 30 vote on changing the rules for union certification elections.

In his letter, Kline complained that he was not privy to some of the deliberations of the board (that is, of the two Democratic members) and thus might fail to show up for the scheduled vote. But in a long and devastating letter that board chairman Mark Pearce sent to Hayes yesterday, Pearce documented more than a dozen instances in which he and the board’s staff invited Hayes and his own staff to participate in all aspects of the rule-development process — hearings, data collection, even just trying to get Hayes to tell him which portions of the proposed rule he supported and which he opposed, and negotiating a compromise based on that discussion — only to have his entreaties either rejected or ignored by Hayes and his staff. In essence, Pearce told Hayes, you moved heaven and earth to ensure your exclusion from the process.

Whenever Republicans blow up another longtime tradition of governance, I always think, “What can they do for an encore? What’s the next norm to go down for the count?” This one isn’t as important as the filibuster norm, or even the debt ceiling norm, but on a smaller scale it’s certainly every bit as egregious.

But I wonder what’s next?