After my griping yesterday about the 340-ton boulder being installed above a trench in front of the Los Angeles County Museum of Art, Isaac Butler tweeted a challenge:

You’re asking “why this work of art?” When someone takes you in good faith and tries to explain it to you, you then dismiss it. Is there any explanation of a work of art’s value beyond surface pleasure that you see as 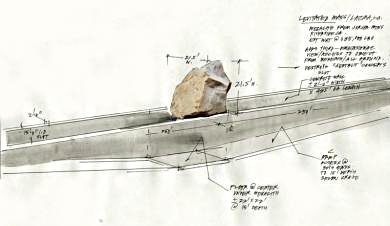 valid? I find some art world discussion insular and pretentious, I feel you on that. But I’m genuinely curious as to what a valid discussion of a work of art’s value (or art’s value in general even) would look like to you.

This is totally a fair question. And against my better judgment, I’m even going to try to address it! First, though, some throat clearing and general defensive posturing. Here goes. (1) I don’t know much about art and don’t pretend to. My reactions are those of an ordinary schlub and I don’t expect anyone to take me seriously. (2) The artwork in question, Levitated Mass, is privately funded, so this isn’t a question of outrage over wasteful public spending. If rich people want to spend their money hauling a big rock to LACMA, that’s fine. (3) None of us have seen the finished installation yet. It might well turn out to be far more powerful and evocative than we can guess based on a mere rendering.

But aside from the concept itself, I think it was LACMA’s explication of the installation that really teed me off. Whether it was offered in good faith or not I don’t know, but here it is:

Taken whole, Levitated Mass speaks to the expanse of art history, from ancient traditions of creating artworks from monolithic stone, to modern forms of abstract geometries and cutting-edge feats of engineering.

Even if I don’t know much about art, I can still read English. This sentence makes three claims. Let’s take them in order and try to decide if Levitated Mass really does speak to the expanse of art history:

I understand that all professions have their own language. Not everything that professionals write is pitched toward laymen, and there’s no reason it should be. Still, an enormous signature installation in front of a major public art museum ought to be explicable to more than a tiny minority of art aficionados. That sentence was LACMA’s attempt to make Levitated Mass comprehensible to ordinary people, but it’s just gobbledygook, the kind of artspeak that curators engage in when they have nothing real to say. It makes no sense on its own terms and certainly does nothing to help its subject create an emotional connection with its audience.

I don’t expect to understand the nuances of great art without putting in some study. Honest. But installations like this are the kind of thing that’s divorced the art world from the vast majority of modern-day audiences. Maybe, in the end, it will be awe-inspiring solely by virtue of its size. 340 tons is a big rock, after all. But why bother? There are already lots of awesomely big things in the world, and in the 21st century it’s not really very profound to haul an awesomely big thing from one place to another. Artists and curators owe us more than that. They owe us art — something purposefully crafted to show what the human mind is capable of — and when they talk to us about their art, they owe us language that’s neither insular nor pretentious. I don’t really understand why that seems to be so much to ask for.