Okay, this isn’t actually raw data. In fact, it’s very, very cooked and calculated data. But just so you know, Peter Diamond and Emmanuel Saez have tried to calculate the tax rate on the rich that would maximize revenue to the government. Paul Krugman summarizes:

In the first part of the paper, D&S analyze the optimal tax rate on top earners. And they argue that this should be the rate that maximizes the revenue collected from these top earners—full stop. Why? Because if you’re trying to maximize any sort of aggregate welfare measure, it’s clear that a marginal dollar of income makes very little difference to the welfare of the wealthy, as compared with the difference it makes to the welfare of the poor and middle class. So to a first approximation policy should soak the rich for the maximum amount—not out of envy or a desire to punish, but simply to raise as much money as possible for other purposes.

Now, this doesn’t imply a 100% tax rate, because there are going to be behavioral responses—high earners will generate at least somewhat less taxable income in the face of a high tax rate, either by actually working less or by pushing their earnings 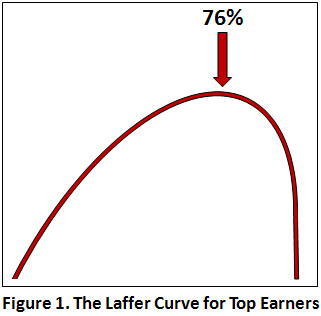 underground. Using parameters based on the literature, D&S suggest that the optimal tax rate on the highest earners is in the vicinity of 70%.

Actually, Krugman is being conservative here. If you assume a broad base and no deductions, Diamond and Saez peg the revenue maximizing rate for top earners at 76 percent. That’s for federal income tax only. (See page 173 here.)

You can decide for yourself if you think top marginal rates should be that high. After all, revenue maximization isn’t our only social goal. Roughly speaking, though, this is a calculation of the peak of the famous Laffer Curve. (For top earners, anyway.) Above 76 percent, you really can generate higher revenues by lowering tax rates. Below that, higher rates generate higher revenue, just like you’d think.

Note that this is a result that both liberals and conservatives ought to take some satisfaction in. For liberals, it’s confirmation that current tax rates are far, far below the Laffer maximum. We can raise marginal rates from 35 to 40 percent with only minor deadweight losses. For conservatives, it’s justification for the 1981 Reagan tax cuts. When top rates were at 70 percent, reductions may not have literally paid for themselves, but they probably lowered revenue fairly modestly. We really were pretty close to the Laffer maximum in the ’60s and ’70s.