This is the damnedest thing. The Financial Times reports today on why the recent EU summit to save the euro collapsed into a debacle, with Britain opting out entirely and forcing the rest of Europe to go ahead without them. The basic story, of course, is that British prime minister David Cameron demanded special protections for London’s financial sector and neither Germany nor France was willing to go along. But what’s striking to me is how incompetent the negotiation process was on all sides.

The FT reports that Cameron met with Angela Merkel in November and got the impression she was willing to deal. So he went home to work on a proposal, but he and William 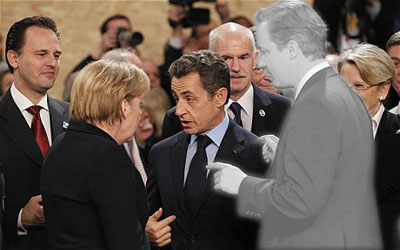 Hague kept their cards close to their vests until the very last moment:

They wanted the bid to be kept secret from two potential adversaries. The first was Mr Cameron’s hardline eurosceptics, who want an EU referendum and repatriation of powers….The second was France….Moreover, the British position was not settled till late. On Tuesday December 6, Mr Cameron assembled his chief foreign policy advisers.

[Note: the summit was due to take place December 9th.]

….It is unclear whether Mr Cameron was aware of the warning lights flashing in the Whitehall machine….From Paris, too, came warnings that Mr Sarkozy was intent on a weaker, intergovernmental pact….Berlin, meanwhile, was warning London not to overdo it in pushing Germany. Nikolaus Meyer-Landrut, Ms Merkel’s Europe adviser, was given early sight of the City protocol and said it went too far. When asked what was acceptable, German officials made clear it was not their place to draft UK demands. After a flurry of Franco-German diplomacy, a common position took shape: if the British did not temper their demands, a deal would be done without them. Days before the summit, German officials said their “pessimism was more pronounced” – words intended as a clear signal to London.

You can read the rest of the piece for more details, but what’s most striking is how little communication there was here. My sense of these kinds of summits is that they’re always preceded by weeks of frenzied activity among mid-level negotiators so that the top level folks just have to work out a few well-defined issues before they appear smiling before the cameras when the summit ends. But no. As near as I can tell, Merkel’s advisor, Nikolaus Meyer-Landrut, got a look at Britain’s demands on December 7 and refused to engage with them beyond saying they went too far. On the morning of December 8 Merkel and Sarkozy met privately. On the evening of the 8th, the FT reports, they invited Cameron to a pre-summit meeting and “ambushed” him by flatly turning down his demands. And that was that.

What the hell kind of way is that to run a railroad? It’s crazy.

Now, I’ll confess that this whole affair puzzles me on another level. The main point of the summit was to gain agreement for some level of European control over national budgets, with automatic sanctions for countries that run budget deficits that are too big. I can understand Spain and Greece and the other periphery countries agreeing to this under pressure. But was Britain also willing to agree to this if only they got a special deal for their financial industry? I find that frankly hard to imagine. And yet, it doesn’t seem to have been a sticking point.

But why on earth would Britain, which isn’t part of the euro, agree to fiscal oversight like that? What’s in it for them?

In any case, it’s too bad Cameron didn’t figure out a way to scuttle the whole noxious mess and force Merkozy — that’s what everyone calls Merkel and Sarkozy, sort of like Brangelina but without the charisma — to deal with Europe’s actual problem instead of obsessing over budget deficits and idiotically unenforceable “binding” sanctions. Until they deal with the root of the problem, this is all just so much gum flapping.