I’ve wondered for a long time why the finance industry has gotten so immensely profitable in an era of computerization, globalization, and intense competition. After all, those are things that you’d expect to reduce sector-wide profits, not increase them. The answer remains a bit mysterious, so I’m glad to see an actual economist asking something similar: namely, has the cost of financial intermediation gone up or down in recent decades? Here is NYU finance professor Thomas Philippon:

The cost of intermediation in the US is between 1.3% and 2.3% over 130 years. However, the finance cost index has been trending upward, especially since the 1970s. This is counter-intuitive. If anything, the technological development of the past 40 years — in IT in particular — should have disproportionately increased efficiency in the finance industry. How is it possible for today’s finance industry not to be significantly more efficient than the finance industry of John Pierpont Morgan?

If Philippon is correct, the financial industry charges more for its basic task of matching borrowers and lenders than it used to:

What happened? Why did we get the bloated finance industry of today instead of the lean and efficient Wal-Mart?….One simple answer is that technological improvements in 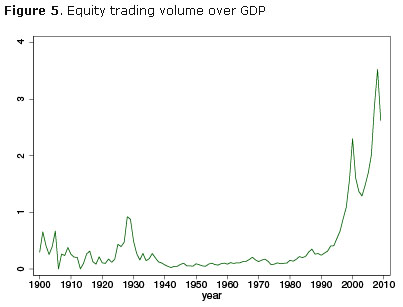 ….The finance industry of 1900 was just as able as the finance industry of 2000 to produce bonds and stocks, and it was certainly doing it more cheaply. But the recent levels of trading activities are at least three times larger than at any time in previous history….I conclude that the most important questions in finance today are:

1. A positive question: Why do people (fund mangers, households, etc.) trade so much?
2. A normative question: Has increased trading led to either better prices or better risk sharing?

I would like to believe that the answer to (ii) is yes, but I am still waiting for the evidence. If the answer turns out to be no, then we would have to conclude that the finance industry’s share of GDP is about 2 percentage points higher than it needs to be and this would represent an annual misallocation of resources of about $280 billion for the US alone.

Hmmm. I’m pretty sure that nearly all of the recent increase in trading volume is due to automated trading, and in particular to high-frequency trading. This is almost certainly a socially useless activity, but does it account for $280 billion in resource misallocation? Maybe. That’s a big number, but not so big that it seems obviously ridiculous. What’s more, if this number is correct, you should probably figure that resource misallocation in fixed-income trading is at least two or three times as big. The total could be a trillion dollars or more. That’s a helluva lot of waste.