A few days ago Tyler Cowen kicked off a discussion of whether or not Germany (and the core European countries in general) have acted more virtuously than Greece (and the periphery countries in general) during the decade since the euro was introduced. It was unclear how much he was simply presenting a debating case vs. how much he actually believed his own arguments, and in that spirit I want to present a different case. This one is about how Europe got where it is today and who deserves a bigger share of the blame for its current mess. I’m not suggesting this is the only way to look at things, or even necessarily the best way, but I do think it’s an instructive way. So here it is in seven easy steps.

1. The introduction of the euro made cross-border capital flows far more frictionless. As a result, money began flowing from the sluggish economies of the core countries (mostly Germany, but also France, Benelux, and others) to the more capital-starved 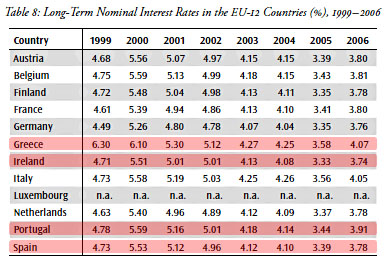 economies of the periphery. You can tell two basic stories about why this happened:

a) A “push” story: Investors chasing higher yields actively pushed money into the more vibrant economies of the periphery.

b) A “pull” story: Profligate national governments, addicted to living beyond their means, pulled money into the periphery via heavy borrowing, which crowded out private borrowing.

Most likely, both of these were part of what happened and both reinforced each other. But generally speaking, if the pull story were true you’d expect to see increases in nominal interest rates in the periphery. As the table above shows, that’s not what happened, which means the push story is more likely to be the primary explanation. The primal sin here is that for years supposedly sophisticated investors in the core shoveled money into the periphery with abandon, ignoring the obvious risks of doing so. 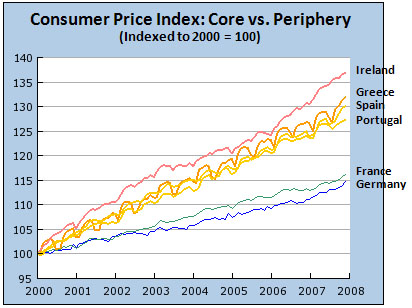 2. Normally, capital flows would eventually be moderated by changes in exchange rates, but this was impossible for the periphery since they no longer had their own currencies. The result was persistent hot money flows into a fixed exchange rate area and steadily higher inflation in the periphery compared to the core. This state of affairs is widely known to be unsustainable and eventually disastrous, but it was something Germany happily ignored since it provided German savers with a place to invest their money and provided the periphery with enough cheap capital to act as a thriving market for German exports. 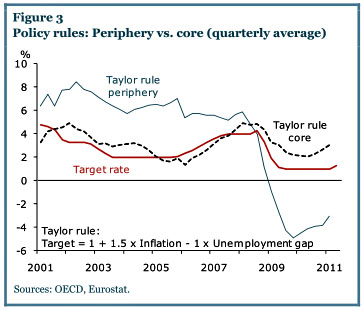 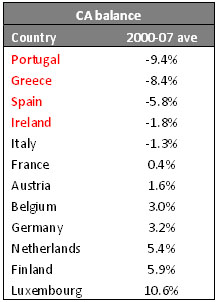 So all the current account deficit countries inevitably got one or the other or both. In the event, Ireland and Spain got a property bubble; Greece and Portugal ran up sizeable budget deficits. We know from painful experience that capital flows like this are unsustainable in the long run, but they can go on for quite a while until something happens to scare everyone into calling a halt and producing a sudden crisis. The 2008 financial crisis was “something.”

5. There’s another side to this too: banks intermediate current account deficits. This is inevitable, hydraulic. A banking system in a current account deficit country always features a high loan-to-deposit ratio, which means that banks in the periphery became dependent on skittish wholesale funding instead of more durable retail deposits. As with capital inflows, when investors suddenly decide to stop the music, wholesale funding dries up and the banking system goes into cardiac arrest. 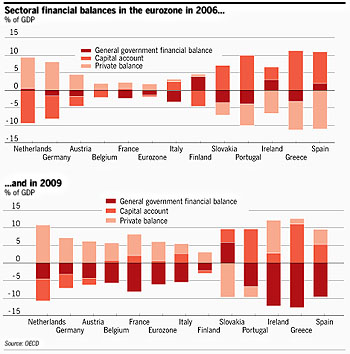 6. This creates a vicious cycle: The financial crisis produced a recession that cratered both periphery country finances and the periphery’s banking system. Budget deficits in the periphery blew out, debt levels became unsustainable, and at the same time investors began a run on their banking systems. As Hyun Song Shin puts it, “The European crisis carries the hallmarks of a classic ‘twin crisis’ that combines a banking crisis with an asset market decline that ampli?es banking distress…In the European crisis of 2011, the twin crisis combines a banking crisis with a sovereign debt crisis, where the mark-to-market ampli?cation of ?nancial distress interacts to worsen the banking crisis.” 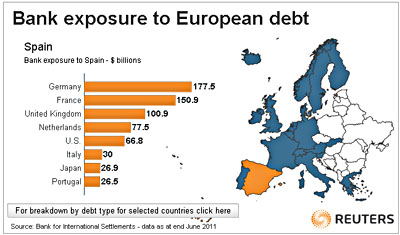 7. The damage wasn’t limited to the periphery. All those capital inflows came from the core, and when the music stopped and the periphery was left in shambles, banks that had loaned out all the money were suddenly in trouble too. As an example, the chart on the right shows bank exposure to debt from Spain. German and French banks alone have over $300 billion in exposure to Spanish debt, so if Spain goes kablooey, so do they. And that brings us to the present day.

If you’ve read this far, let me make it clear that nothing here is meant to absolve the periphery countries from their part in this. Ireland fed the fire of its property bubble irresponsibly, Greece lied about its finances, and throughout southern Europe there was a persistent refusal to reform their labor practices, improve productivity, and live within their means. The core countries have every right to hold the periphery accountable for this.

At the same time, this is fundamentally a story of economics, not morality, and it’s only in Step 1 above that the periphery countries bear even a share of the blame for what happened. The rest was either caused by deliberate core policies or else the inevitable result of those policies. Whether Germany likes to hear it or not, it’s simply a fact that both sides allowed—even encouraged—capital flows to remain imbalanced for far too long. The periphery enjoyed access to cheap money and the core liked having a thriving market for its exports. The core and the periphery both rode this wave up, and now they’re both going to have to ride it down.

What does all this mean going forward? I guess I’d say a few things:

As a side note, it’s worth pointing out that Italy is sort of a special case here. (That’s why I didn’t include them in the charts above.) Their economy has been in the doldrums for over a decade, and that’s something they need to address. At the same time, they were a middle-of-the-pack country on a wide variety of economic measures all through the aughts: they ran only modest current account deficits and modest budget deficits; their inflation rate was only a bit higher than Germany’s; and their debt-to-GDP ratio actually declined. Their problem isn’t so much that their fundamental economic position is disastrous, it’s that (a) their economic position was weak and the recession made it weaker, and (b) they’re much larger than any of the other periphery countries. They’re ground zero of the crisis right now simply because investors have lost confidence in them, but they don’t really belong in the same basket as the four other periphery countries.