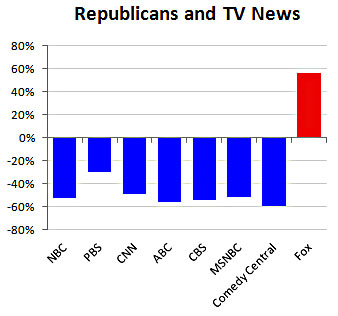 Public Policy Polling is out with their 3rd annual TV news trust poll. Among Republicans, as the chart on the right shows, the shape of the river is simple: they don’t trust anyone except Fox News, who they adore. These numbers are spreads, with NBC, for example, garnering 17% trust vs. 69% distrust. Fox News, conversely, garners 73% trust vs. 17% distrust.

Well, you say, maybe this just means that trust in the media is really low these days? Nope. Democrats and Independents may not trust Fox, but they do trust everyone else. The percentages vary, with more skepticism toward some outlets than others, but what non-Republicans don’t do is simply dismiss television news en masse as a bunch of lying corporate shills. Paul Waldman explains:

While I was in the car yesterday I turned to a conservative talk radio station, which I recommend all liberals do from time to time. The host, whom I didn’t recognize, brought up some innocuous piece of news reporting that appeared in the Politico. As you know if you care about these things, the Politico is a complicated media entity. On one hand, they employ a lot of reporters and they sometimes break interesting stories. On the other hand, they’re almost a parody of the inside dope-obsessed Washington media, which finds the question of whether Eric Cantor’s press secretary and John Boehner’s press secretary are feuding far more compelling than, say, the question of what effects cuts in Medicaid would have on struggling Americans. But when this conservative talk show host mentioned the Politico, he found it necessary to refer to it as “the left-wing rag the Politico.”

Here in Washington, almost no one in either party is crazy enough to think that the Politico is actually a left-wing rag, an ideologically-motivated news outlet whose purpose is to advance the liberal cause. And whether this talk show host’s listeners know or care much about it in particular isn’t my point. My point is this: If you are a consumer of conservative media, you get constant reminders — every day, multiple times a day — that you absolutely must not believe anything you hear or read in any news outlet that is not explicitly conservative.

Everybody — yes, everybody — is subject to confirmation bias. We all get the warm fuzzies when someone tells us something we want to hear, and we resist listening to people who tell us things we don’t want to hear. But there’s still a difference. As Paul says, “Conservatives and liberals are not equally prone to huddle within their self-reinforcing cocoons.” Liberals don’t immediately dismiss as a conspiracy everything they hear from the news media that doesn’t fit their preconceived notions. They might downplay unwelcome news or even ignore it, but they’re still willing to listen to it. Increasingly, conservatives simply aren’t. They want to believe the world is a certain way, and they’re just flatly not willing to countenance anything that might challenge those beliefs. This is not a healthy development for a modern democracy.

UPDATE: Chart edited to show the correct figure for the Fox News trust/distrust difference (56%, not 73%). Thanks to reader Dan H. for catching the error.